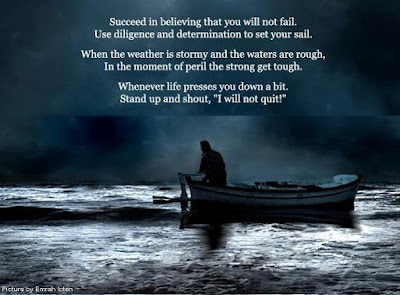 Here Below is the most famous verse of Bhagwat Gita which explains that one should excel in doing his work without keeping the end result in mind. If you do not work with the end result or preset outcome in mind & rather enjoy the way, the process, the path in doing any work, you shall certainly succeed in your work. So it is always better to perform your actions and carry out your duty in an efficient way rather than caring or worrying about the results.

"Sri Krishna said to Arjuna: You have a right to perform your prescribed duty, but you are not entitled to the fruits of action. Never consider yourself the cause of the results of your activities, and never be attached to not doing your duty."

Here below is a beautiful real story which teaches us the same.

"In 1947, Lester Wunderman was arbitrarily fired from his advertising job in New York. But he felt he still had a lot to learn from the head of the agency, Max Sackheim. So the next morning, Wunderman went back to his office and began working as he had before. He talked to co-workers and clients; he sat in on meetings - all without pay. Sackheim ignored him for a month.

Finally, he walked up to Wunderman: 'Okay, you win', he said, shaking his head. 'I never saw a man who wanted a job more than he wanted money.' Well, guess what? Wunderman went on to be one of the most successful advertising men of the century. He's credited with having invented preprinted newspaper inserts, plus subscription cards such as those used by Time-Life Books and the Columbia Record Club; ideas that have produced billions of dollars in profit. Now, advertising may not be your thing - but action must be.

What are you willing to do to achieve your dream? Work without pay? Refuse to quit? Success begins at the beginning, and it continues with consistent action without caring for the success or failure."
Posted by Sancho at 8:41 PM