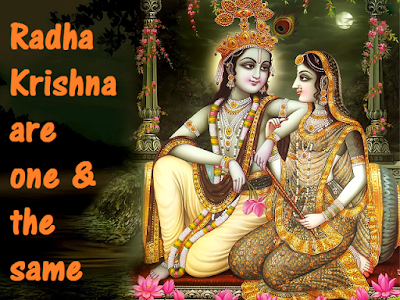 Lord Krishna is the supreme God & Radha Rani is the devotional energy of Lord Krishna. Radha Rani is not different from Lord Krishna & both are one & the same being.That is the reason that both are also addressed as RadhaKrishna. Lord Krishna is eternal, all-knowing, omnipresent, all-powerful and all-attractive God. He is the seed-giving father of all living beings and is the sustaining energy of all the universe. He is the source of all incarnations of God. So whatever, we eat should first be offered to Lord Krishna with a prayer to Him. In this way Lord Krishna accepts the offering and blesses us. So let’s don’t live in a self-cantered way & let’s do all our acts for the pleasure of Lord Krishna. This is known as Bhakti-Yoga, the science of Devotional service.

Gopis & Radha's love for Lord Krishna was so strong that in His absence their mind always yearned for Him. Below are described the "Bhaav" or "Spiritual Emotions" of one Gopi who is yearning to meet God - Lord Krishna :

"O Krishna! You are Lord of my life. You always remain so in my life. O Lord, don't keep me out of your mind. O Lord, pl. don't forget me."

As per the Bhagwat Gita, devotion is the easiest method to develop "Bhaav" & get close to the God. God himself declares about the glory of devotion in Bhagwat Gita:

"Sri Krishna says to Arjuna: Always think of Me, become My devotee, worship Me and offer your homage unto Me. Thus you will come to Me without fail. I promise you this because you are My very dear friend."

So let's have devotion in God. Let's remember God for some time in our daily life so that we too can generate some "Bhaav" or "Spiritual Emotion" towards the God. Once that is developed, we shall always find God near us & our life shall be filled with joy, love & ecstasy.

Jai Shri Krishna
Posted by Sancho at 11:42 AM No comments: 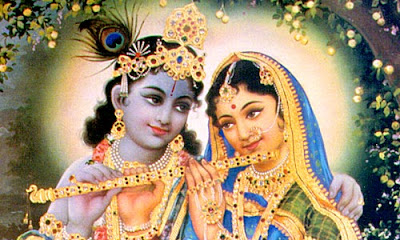 In Indian culture, Satsang or a religious congregation where thousands of spiritual or religious people assemble together is a very common sight. Such Satsang or religious congregations generally happen regularly in Indian cities where spiritual discourses are given by a Guru & thousands of people listen to such discourses. Have you ever thought, how many of these thousands of people assembled there really have a true desire to know God? In fact most of these people are worldly people who have their mind deeply engrossed in their family affairs. Very few in the crowd are there who have a true desire to know God in reality.

In Bhagwat Gita also the Great Lord, Sri Krishna says the same about this matter. Below is a good verse, "Verse - 3, Chapter Seven of Bhagwat Gita"teaching the same thing.

“Sri Krishna said: O Arjuna, Of thousands of men some rare soul strives to realize Me & endeavour for perfection, and of those striving Yogis, again, someone rare one (devoting himself exclusively to Me) knows Me in reality."

Devotees are of different types. Some remember God when they are in distress & want to get rid of their grief. Some want to know God due to their inquisitiveness about Him. Some pray God to attain wealth in life while some wise men want to have true knowledge of God. As per Bhagwat Gita there are 4 types of devotees of God.

1) First one are those people who are in distress. In our bad times when we are in distress or when we are going through physical or mental agony, at that time we generally remember & pray to God. Such people devote themselves to God because they wish to be liberated from grief.

3) Third one are those people who want to gain wealth in life. There is no end to such people in this world. You can find such people generally in temples etc. asking God to give them wealth, money etc. Such people are those one's who do their appointed task for money because doing it will bring good fortune to them. So such people are the doers of selfish action in life.

4) Fourth one are those people who are people of True knowledge. Such people are really the wise men.They have true knowledge to God. They are the realized sages, who have attained to the stage of reaching the supreme goal.

Below are the verses of Bhagwat Gita which explain about the above said 4 types of devotees.

"Sri Krishna said: O Arjuna, four kinds of pious men begin to render devotional service unto Me—the distressed, the inquisitive, the desirer of wealth, and the one who is searching for knowledge of the Absolute."

"Sri Krishna said: All these devotees are undoubtedly magnanimous souls, but he who is situated in knowledge of Me, I consider to be just like My own self. Being engaged in My transcendental service, he/she is sure to attain Me, the highest and most perfect goal."

So just check, which type of devotee of God are you? If you are not the fourth one i.e. a person of True knowledge, a really wise person, then just strive to be the one. Just devote yourself to God, read religious literature, join the company of saintly people, give charities, alms to the people. Doing all such good works & having a yearning for God, you shall certainly become a wise person, a true devotee of God & shall ultimately attain to Him.

Also if you have some Guru or you know of a great soul whom you revere as Great Godly person, then be sure that your Idol person, really has knowledge of God & has realized Him in life. Just check, whether he is the real rare Gem who knows God in reality & can lead you also to God.