There are many people in this world who have staunch faith in God, while there are others who doubt His existence. Doubt about God is basically a feeling of uncertainty about the truth, reality or distrust of the existence of God. In spiritualism doubt is just the opposite of the Faith. Faith in God as the Supreme reality is the essence of any religion. If you have doubt in the existence of God & do not consider Him the all powerful one, who has created this universe & it's creation, then you are not the Faithful one.

Faith makes our perceptions & beliefs. If you have Faith & believe in religious scriptures, words of a saint, then you are able to turn toward the God. It's Faith only which determines how you can mould your life. Here is a small story which explains the virtues of faith:

"Once upon a time there used to live four monks in a hermitage with their master. Three of the monks always used to spend all of their time in debating and talking about the existence of God & all types of intellectual pursuits. Fourth one was a simple man who had great faith in God & always used to sweep the floors of the temple. At the end, this simple man got enlightenment first. At this the intellectual monks asked their master, how come the simple man got enlightenment first? At that their master responded, "When he was sweeping the temple floor, he was also sweeping the corners of his mind of all doubts". His firm faith in God without any doubt is the reason that he is able to attain to enlightenment first."

If you do not have faith in God then you cannot believe in the words of God. Such a doubting person cannot find peace in life & cannot attain to the Divine consciousness. Doubting soul finds happiness neither in this world nor in the next, while the faithful one's attain peace & reach to God easily. Below verse of Bhagwat Gita explains that only.

"Sri Krishna said: But ignorant and faithless human beings who doubt the revealed scriptures, do not attain to the God consciousness; they fall down. For the doubting soul there is happiness neither in this world nor in the next."

Below verses of Bhagwat Gita describe the virtues of Faith:

"Sri Krishna said to Arjuna: When one’s Intelligence, Mind, Faith and refuge are all fixed in the God, then one becomes fully cleansed of misgivings through complete knowledge and thus proceeds straight on the path of liberation."

"Sri Krishna said to Arjuna: And of all yogis, the one with great Faith, who always abides in Me, thinks of Me within himself, and renders transcendental loving service to Me—he is the most intimately united with Me in yoga and is the highest of all. That is My opinion."

So let's have Faith in God & do not doubt about the existence of God. It shall be Good if you have Faith in the words of a saint or in religious books than denying the fact that billions of people on earth, believe in God, pray daily for God & find peace of mind in God. So just proudly say, "Yes, I believe in God".

Jai Shri Krishna
Posted by Sancho at 10:51 AM 5 comments:

From Deity to Infinity 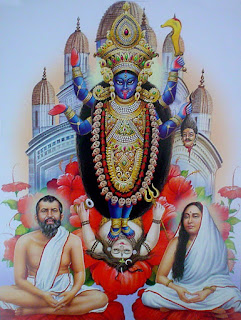 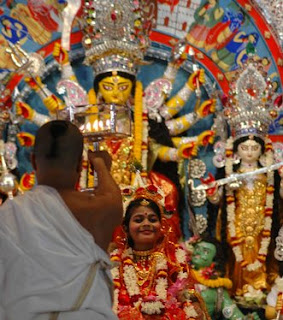 As per the philosophy of Bhagwat Gita & Hinduism, God is omnipresent (present everywhere) in it's un-manifest aspect & is always present all around us. Every inch of the space is occupied by Him. Every nook & corner is filled by Him. In this aspect He is called Brahm (God) who is Truth Absolute, Knowledge Absolute and is Infinite.

So this omnipresent, un-manifest God appears before a devotee in whatever form he worships Him, whether it is the form of Rama, Krishna, Vishnu, Shiva, Shakti, Ganesha or any other form. A devotee should always remember that the God whom he worships, always pervades through this whole universe & can manifest Himself in any form, anytime He wants to appear before his devotee. God is never invisible to such souls who have understood His true nature, nor does He ever lose sight of them.