Krishna Bhakti Is The Best Purifier 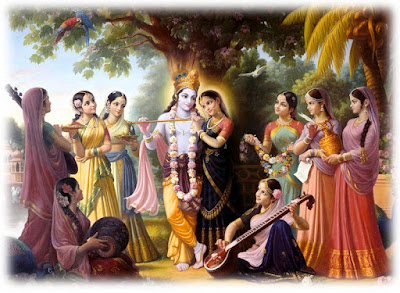 "Sri Krishna says to Arjuna: Always think of Me, become My devotee, worship Me and offer your homage unto Me. Thus you will come to Me without fail. I promise you this because you are My very dear friend."
Bhagwat Gita: Chapter Eighteen verse 66:

"Sri Krishna says to Arjuna: Abandon all varieties of religion and just surrender unto Me. I shall deliver you from all sinful reactions. Do not fear."
In the above verses of Bhagwat Gita, Lord Krishna is assuring Arjuna that He shall always be with him in all circumstances if he is always in devotion to Him. Same thing applies to every human being also. If a person remains devoted to Lord Krishna then Lord promises that He shall deliver that person of all the sins of the past & purify that person. By doing such loving service to the Lord, certainly that person shall be in the eyes of Lord & Lord shall always protect that person.
So let's be devoted to Lord Krishna always. Let's sing His Glories, read literature regarding Him & also do loving service to humanity (charity etc.) in His name. So lets have devotion to Lord Krishna. Remaining in Krishna consciousness is good for everyone. Krishna is one of the﻿ names of God and it means all-attractive. So Praise to such a Lord.

Posted by Sancho at 8:50 AM No comments: 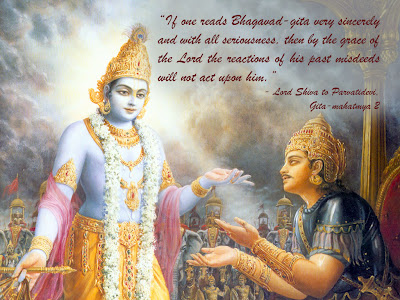 Lord Sri Krishna is the Supreme Lord & He gave Divine knowledge to Arjuna on the battlefield of Mahabharata. Lord Sri Krishna in Bhagwad Gita is teaching that we should consider ourself as that immortal Soul & that we all are immortal, if we do not think ourselves as this Body but Soul.

"Sri Krishna said: Whenever and wherever there is a decline in virtue/religious practice, O Arjuna, and a predominant rise of irreligion—at that time I descend Myself, i.e. I manifest Myself as an embodied being."

"Sri Krishna said: You have a right to perform your prescribed duty, but you are not entitled to the fruits of action. Never consider yourself the cause of the results of your activities, and never be attached to not doing your duty."

"Sri Krishna said: The soul can never be cut to pieces by any weapon, nor burned by fire, nor moistened by water, nor withered by the wind."

Be aware of me always, adore me, make every act an offering to me, and you shall come to me; this I (Krishna) promise, for you are dear to me.

So Let’s Surrender to the will of God & be devoted to Lord Krishna. By doing so God shall always protect us in life.

"Sri Krishna said: You have a right to perform your prescribed duty, but you are not entitled to the fruits of action. Never consider yourself the cause of the results of your activities, and never be attached to not doing your duty."

So it is doing our job / duty in a proper manner that gives true happiness in life. So let’s do our job / duty properly without much caring for, how much money it shall generate.

"Sri Krishna said: Whenever and wherever there is a decline in virtue/religious practice, O Arjuna, and a predominant rise of irreligion—at that time I descend Myself the Lord of the universe, i.e. I manifest Myself as an embodied being."

"Sri Krishna says to Arjuna: Those who follow this imperishable path of Devotional Service and who completely engage themselves with faith, making Me the supreme goal, are very, very dear to Me." (Bhagwat Gita: Chapter Twelve verse 20)

"Sri Krishna said: O Arjuna, there is no truth superior to Me. All this Universe, Every living being & Everything rests upon Me, as pearls are strung on a thread." (Bhagwat Gita: Chapter Seven verse 7)

So Let's surrender our ego in the Divine feet of the God & adore Him only so that He can give us a blissful life.
Jai Shri Krishna

Posted by Sancho at 8:22 AM No comments:

How Can Our Sins be Purged? 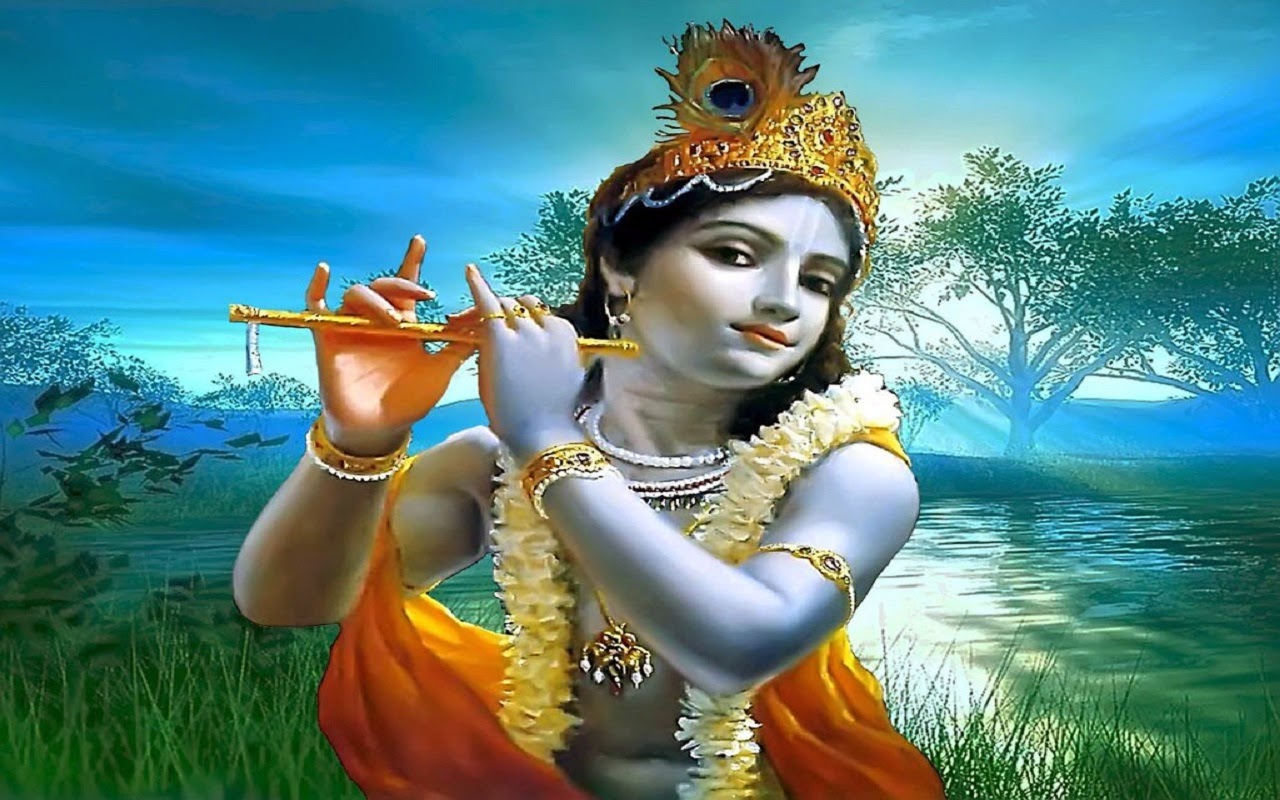 In Bhagwat Gita, we find many quotes which explain about how we can eliminate our sins. As per Bhagwat Gita there are two main ways to get rid of your sins. One way is to to learn the truth about soul knowledge & God by approaching a spiritual master, inquiring from him submissively and rendering service unto him. The self-realized souls (Gurus, masters having the true knowledge) can impart knowledge unto you because they have seen the truth. So by having the transcendental knowledge you shall burn & get rid of all your sins.

"Sri Krishna said: Just try to learn the truth by approaching a spiritual master. Inquire from him submissively and render service unto him. The self-realized souls can impart knowledge unto you because they have seen the truth."

"Sri Krishna said: Even if you are considered to be the most sinful of all sinners, when you are situated in the boat of transcendental knowledge you will be able to cross over the ocean of miseries."

"Sri Krishna said: As a blazing fire turns firewood to ashes, O Arjuna, so does the fire of knowledge burn to ashes all sins & reactions to material activities."

One other way to get rid of all your sins is to take refuge in God through "Devotion". In Bhagwat Gita, God assures his disciple Arjuna in many ways & asks him to take refuge in Him & says that He shall emancipate him of sin in all ways, shall rescue him in his life always. Many times we think that we have done many sins in life & how God shall accept us, but God makes very clear in Bhagwat Gita that once a person become devoted to Him, He does not considers that person a sinner, rather God considers that person to be a Saint as he has taken the right decision in his life to become devoted to God.

Through above verse 31, God is telling Arjuna that such a sinful person after becoming His devotee becomes a person of good virtues and always remain in peace & such a peace is not temporary but is ever lasting. God is assuring the son of Kunti ( another name of Arjuna, his disciple) that his devotee never falls again in life as He always protect him. So let's all worship the God always so that He can protect us always.

'Fix your mind on Me, be devoted to me, worship Me & offer obeisance's to Me. In this way, linking to Me, you shall surely come to Me.'

Through above verse 34, God is asking Arjuna to fix his mind on God as after worshipping Him & paying obeisance's to God, he shall automatically come to Him. We should also follow the same path & let's become devoted to him by praying Him daily. God is very clear that once a person comes in God's refuge, then all his problems are solved & God becomes his protector in this life & life beyond.