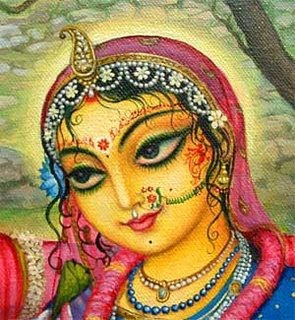 It is said that Sri Radha is herself the "Devotional energy" of Lord Shri Krishna who is the Lord of the universe. Her name always comes before the name of Lord Krishna that is why God's one name is "Radha Krishna" also. Just take out only one "R" from "Radha Krishna" & it becomes just "aadha Krishna" i.e. "half Krishna" & that is the power of the name "Radha".

"Shyama" is another name of Shri Radha.

Similarities between the lives of Jesus and Lord Krishna 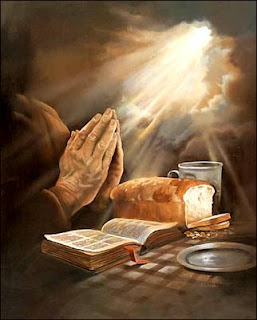 Prayer is an act of addressing the God for the purpose of worship or petition. Prayer is a way of having a personal experience and intimate connection with our loving God.

You should treat God just like your friend who knows everything about you. You can then count on your friend (God) all the time. Anytime you need Him, you can call and He won’t be upset with you. He is willing to listen to you and responds with love and concern all the time. The method of such calling your friend (God) is PRAYER. Rest assured that God is available to you 24 hours a day, 7 days a week, all through the year.

Below are some beautiful quotes about the Prayer:

Practice in life whatever you pray for, and God will give it to you more abundantly. -Pusey

We don't thank God enough for much that He has given us. Our prayers are too often the beggar's prayer, the prayer that asks for something. We offer too few prayers of thanksgiving and of praise. -Robert E. Woods, D.D.

If you would have God hear you when you pray, you must hear Him when He speaks. He stops His ears against the prayers of those who stop their ears against His laws. -unknown

In prayer it is better to have a heart without words, than words without a heart. -Bunyan

Never think that God's delays are God's denials. True prayer always receives what it asks, or something better. -Tryon Edwards

Why You Should Read Bhagwat Gita? 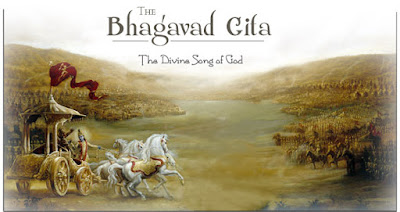 Before elaborating my view point, why you should read Bhagwat Gita, below are thoughts of century's greatest saint Mahatma Gandhi about Bhagwat Gita & why he used to read this great philosophy of Bhagwat Gita.

"When doubts haunt me, when disappointments stare me in the face, and I see not one ray of hope on the horizon, I turn to Bhagavad-Gita and find a verse to comfort me; and I immediately begin to smile in the midst of overwhelming sorrow. Those who meditate on the Gita will derive fresh joy and new meanings from it every day." - Mahatma Gandhi
Now here is what I have to say:

In your day to day life you encounter myriads of problems, gets work pressure, stress etc. Now if you can find some way in which you can de-stress yourself & find peace of mind within you then how good it be. The great philosophy of Bhagwat Gita not only tells us about the Yoga technique which can make your body stress free but also gives many ways by which you can calm your mind. Other than that it tells you about the mystery of Life & Death. It also tells you about the origin of this universe & life on other planets.

In fact Bhagwat Gita is the "Song of the Divine" told by the Divine (God himself) to His disciple Arjuna. In it God (Lord Krishna) himself teaches Arjuna the philosophy of truth. In it Lord Krishna tells Arjuna about the philosophy of rebirth or reincarnation & how individual soul transmigrates from one body to the other. It also teaches you the difference between a Soul & Supersoul (God). It also tells you, what is Karma & how you can do the Karma effectively through Karmayoga.

So if you want to have a stress free life & the peace of mind then you should read Bhagwat Gita. If you want to know the mystery of Life & Death, rebirth etc. then also you should read this great "Divine Song". It is basically the essence of all the Vedas, Puranas, Upanishads & all other Hindu scriptures. My say is that if you are able to understand the divine philosophy of Bhagwat Gita then you are able to understand all the great scriptures as it is the essence of all those great books.

Personally to me, reading Bhagwat Gita gives me peace of mind, clears my doubts about life, makes me understand people better & let's me come closer to God.

How much do you care for God? 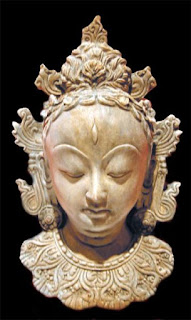 A man once visited a temple under construction where he saw a sculptor making an idol of God. Suddenly he noticed a similar idol lying nearby. Surprised, he asked the sculptor, "Do you need two statues of the same idol?" "No," said the sculptor without looking up, "We need only one, but the first one got damaged at the last stage." The gentleman examined the idol and found no apparent damage. "Where is the damage?" he asked. "There is a scratch on the nose of the idol." said the sculptor, still busy with his work. "Where are you going to install the idol?"

The sculptor replied that it would be installed on a pillar twenty feet high. "If the idol is that far, who is going to know that there is a scratch on the nose?" the gentleman asked. The sculptor stopped his work, looked up at the gentleman, smiled and said, "I will know it."

That is the care that a true devotee of God has it for his God. He wants to care for each aspect of the God. We should also devote fully to God & His work so that He can always be on our mind, heart & soul. By such exclusive devotion only from the heart, we can attain to Him. God himself says in Bhagwat Gita:

"Sri Krishna said: But those who always worship Me with exclusive devotion, meditating on My transcendental form—to them I give what they lack in life, and I protect what they have."

This story also teaches us that we should excel in everything we do in life. The desire to excel is exclusive of the fact whether someone else appreciates it or not. "Excellence" is a drive from inside, not outside. Excellence is not for someone else to notice but for your own satisfaction and efficiency......
Posted by Sancho at 8:22 PM 1 comment: 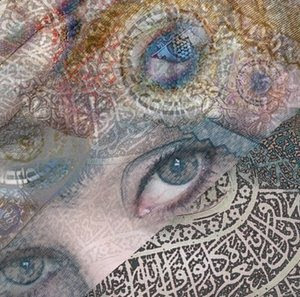 Once there was a king. He had conquered all this earth & was the supreme king of the earth. One day while he was roaming around near his palace, he saw a monk/fakir who was having something very shining in his hand. The king enquired from the monk, which jewel it is & how it is shining so bright? Somehow the monk did not wanted to tell anything about it to the king so he took some dust & threw it on that shining thing & all the bright shine was gone & it appeared to be a stone. At this the king again enquired from the monk what it is & how all the shine has gone just due to sprinkling of some dust on it. At this the monk told the king that it is a jewel just like the human eye. Human eye has all the power to see all things clearly & is always shining but if veil of dust comes upon it then the whole vision is blurred & one cannot see things properly.

Similar to the above is our situation as we are not able to see the true nature of our self & this world. We say that we are this body but one day this body perishes. We don't believe that we are immortal soul but we are born again & again after death, as your soul cannot die ever. Our inner eye or intellect is covered with the dust of ignorance & we don't see things as it is. Our intelligence is covered with ignorance, just like a mirror is covered by the dust & you are not able to see your face properly in it.

We all need to introspect & see where our thinking is right in understanding our self. Let's not cover our mind & intellect with a veil of ignorance but try to see things in right perspective. Below verse of Bhagwat Gita tells about how our mind & intellect is covered with the veil of ignorance. Let's clear this veil with the knowledge of the self (soul) & see properly. Then you shall be able to see that you are that immortal soul which is part & parcel of the Universal Soul (God). When you shall be firm in faith that you are immortal soul, then death shall cease to exist for you as death is of a body & not yourself who is an immortal soul.

Posted by Sancho at 9:27 AM No comments:

Spark of the Divine 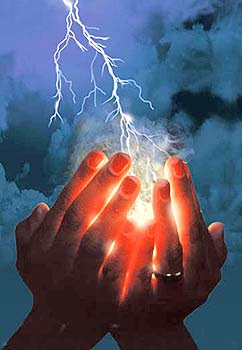 "Who are you? A reflection of the Divine Light.

What is this world? A wave on the Everlasting Sea.

How could the reflection be cut off from the Light?

How could the wave be separate from the Sea?

Know that this reflection and this wave are that very

There is nothing else besides Me,
Like clusters of Yarn-Beads,
Formed by knots on a thread,
All this world is threaded on Me (universal soul)."
Posted by Sancho at 3:59 PM No comments:

Life & Death are essential events in God's creation, Let's see beyond these.........

You are too small in comparison to this vast infinite cosmic creation..........

When your SOUL is all pervading, everywhere present, then where is the point of going & coming.........

Imperfect human beings cannot give you perfect Love, only Perfect one (GOD) can give you Perfect Love...........

Jai Mata Di - Sabse Bada Tera Naam - is a Devotional Bhazan in the praise of of Goddess Durga. It is from Hindi movie - Suhaag

Posted by Sancho at 1:33 PM No comments:

Jai Mata Di - Maa Sherowali - is a Devotional Bhazan in the praise of of Goddess Durga. It is from Hindi movie - Mard -1985

Posted by Sancho at 1:27 PM No comments:

"Tune Mujhe Bulaya Sherawaliye" is a Devotional Bhazan in the praise of of Goddess Durga. It is from the bollywood movie Aasha which was released in 1980. It is sung by Narendra Chanchal Ji & Mohammed Rafi Ji. Jai Mata Vaishno Devi, Jai Mata Di, Jai Kali, Jai Durga, Jai Ambe, Jai Gauri.

Posted by Sancho at 1:23 PM No comments:

Posted by Sancho at 1:20 PM No comments:

Posted by Sancho at 1:17 PM No comments:

Posted by Sancho at 1:02 PM No comments:

"Ganesh Chalisa" is a Devotional song of the Hindus sung in the praise of "Lord Ganesha - Son of Lord Shiva". Pray to Lord Ganesha. Lord Ganesha is a Hindu God who removes all obstacles in life.