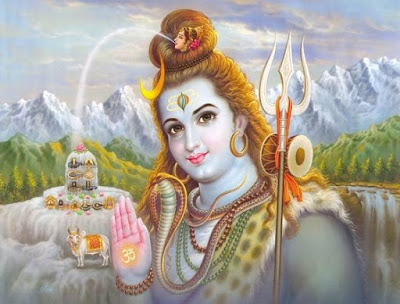 Many legends are associated with the Sivaratri festival. According to one legend, Sivaratri is the wedding day of Lord Shiva and Parvati. As per another legend it is the night when Lord Shiva performed the Tandava Dance - the dance of primordial creation, preservation and destruction. Another legend associates Sivaratri with the great mythical churning of the ocean called Samudra Manthan. According to the legend, during the churning of the ocean, a pot of poison emerged. The gods and the demons were terrified as it could destroy the entire world. When they approached Lord Shiva for help, He, in order to protect the world, drank the deadly poison. However, he held it in his throat instead of swallowing it. This turned his throat blue. Since then Lord Shiva came to be known as ’Nilkantha’, the blue-throated one. Mahashivaratri celebrates this event by which Lord Shiva saved the world.

Now here below is a beautiful story which shows the kindness of Lord Shiva to his devotee & how He saved one of His devotee from the tiger.

Once a hunter was wandering in a dense forest, to chase a deer and suddenly he found himself on the banks of river Kolidum, where he heard the roar of a tiger. In order to defend himself from the tiger, he climbed up a tree close by. The Tiger sat on the ground below the tree without the purpose to leave.

The huntsman stayed at the tree whole night and to keep himself awake, he plucked one leaf after another from the tree and threw it down. There was a "Shiva Lingam" under the tree and gracefully the tree turned out to be a ''bilva'' tree (leaves of this tree are adored by Shiva). Without any knowledge, the huntsman had delighted the Lord Shiva by pouring Bilva leaves all night. With the arrival of the sun, the hunter looked down and found that the tiger has gone. In its place, Lord Shiva was standing there and he prostated before the lord. With Shiva's blessings, he attained salvation from the bondage of the material world.