"Krishna Govind Govind, Gopal Nandlal" is a beautiful devotional chant in the praise of Lord Krishna.

Posted by Sancho at 9:41 PM No comments:

Posted by Sancho at 9:38 PM No comments:

You, yourself are responsible for your Misdeeds

In this world there are many people who have a perverted thinking & they do not want to be responsible for their actions. Such people go on doing bad things in life, harming themselves & others in society, yet not feeling themselves responsible for their such actions. Either such people do not know at all how & why they are doing wrongful actions/misdeeds or they think that some invisible force is getting done all such sinful actions through them & many of them call such force as Satanic force, Devil force, Evil force etc. etc. In fact such people do not want to be responsible for their misdeeds & just want some excuse to put the blame on somebody else or on some invisible force.

"I know what is right, yet I feel no urge for the practice of virtue, I know even that which is unrighteous; yet I am unable to recoil from it. I do as I am prompted to do by some unknown deity installed within my heart."

The above is the view point of bad people in society who do not want to take any blame for their misdeeds/sins due to ignorance & such view point of theirs is altogether worth dismissing.

Now here below is the right perspective with respect to the commission of sins as per "Bhagwat Gita".

"Arjuna said: O Sri Krishna, by what is one impelled to sinful acts, even unwillingly, as if engaged by force?"

"Sri Krishna said: It is lust only, Arjuna, which is born of contact with the material mode of passion and later transformed into wrath, and which is the all-devouring sinful enemy of this world."

"Sri Krishna said: Thus the wise living entity’s pure consciousness becomes covered by his eternal enemy in the form of lust, which is never satisfied and which burns like fire."

"Sri Krishna said: Therefore, O Arjuna, in the very beginning curb this great symbol of sin (lust) by regulating the senses, and slay this destroyer of knowledge and self-realization."

"Sri Krishna said: Thus knowing oneself to be transcendental to the material senses, mind and intelligence, O Arjuna, one should steady the mind by deliberate spiritual intelligence and thus—by spiritual strength—conquer the lust which is the insatiable enemy."

From the above verses of "Bhagwat Gita" it is very clear that it is the individual's Lust & constant feeding of one's senses that a person commits sinful activities. Due to such involvement in lust, one's intelligence gets covered with ignorance, just like a mirror is covered by the dust & you are not able to see your face properly in it. When one's mind and intelligence becomes covered with the dust of lust & sensual activity, then his/her thinking becomes perverted & that person makes God or some invisible force as responsible for his/her sinful deeds, which is not correct. Let's be very clear that we all are responsible for our own deeds/misdeeds & in no case you can put blame of your deeds/misdeeds on any other person; human, divine or any other invisible force. Let's take responsibility for our own actions & let's not do anything which shall harm others in actions, words or deeds.
Posted by Sancho at 10:06 AM No comments:

"Aao Shyamji Kanhaiya Nandlalji" is a beautiful bhajan sung in the praise of Lord Krishna.

Posted by Sancho at 9:53 PM No comments:

Posted by Sancho at 9:03 PM No comments: 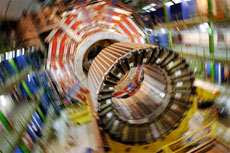 On 10/09/2008 an "Atom-Smasher" experiment started underground along the Swiss-French border to recreate the Big Bang. It is thought that it can unveil the puzzle & the eternal question, "How we all came into being?" As per one theory, only 4-5% of the universe's content is matter and 25% of it is invisible dark matter. As high as 75% of the universe consists of dark energy about which very little is known. The atom-smasher experiment could help scientists solve some of the above said unsolved queries. This European underground experiment is trying to recreate conditions that existed immediately after the Big Bang. 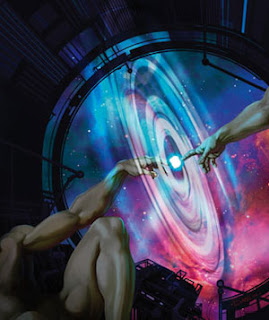 "All world scientists hope to unlock the secrets about the atom, the universe and its origin with collisions of highly charged photons in the "Large Hadron Collider", located 150 meters underneath near Geneva, Switzerland. The Large Hadron Collidor is an experiment which will continue over the next 15 years, to replicate a miniature “Big Bang” that created the Universe.

Neutrons and protons are the best known particles. Scientists hope to discover new particles—Higgs-Bosons, also termed ‘God Particles’ , which they theorize are responsible for mass of atoms. The particles are named after Kolkata-born Satyendra Nath Bose (1894-1974 ) and UK-born Peter Higgs, both eminent physicists. The LHC is the largest and the most costliest experiment in the world ever at over $9 billion. 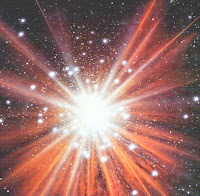 In one controversy 'God particle' theorist Peter Higgs has attacked his Nobel prize rival Stephen Hawking, describing his work as "not good enough". Professor Hawking once placed a $100 bet that the 'God particle' does not exist. However, Scientists believe the 'God particle' is crucial to understanding the origin of mass. Shortly after the big bang, it is thought many particles weighed nothing, but became heavy later on.

MY VIEWS: As per me, all the above said is only in the realm of theories of particle physics & till date there is no evidence of 'God particle' or "Higgs boson". Now I shall try to present my perspective whose basis is in the realm of philosophy. For me Great Indian book "Bhagwat Gita" is the greatest of philosophical book which answers all your queries from how this universe was created or how one should lead one's life or what is the truth of life & death. "Bhagwat Gita" answers all your queries. Now here I shall try to explain the truth about "God Particle" & "Big Bang".

As per "Bhagwat Gita" God has created this universe out of "Zero" or nothing. Sometimes God himself is also called "Zero" as Vedas tell us that "In the beginning was "Zero" or nothing & out of nothing or un-manifest aspect of God, came everything." Before the universe came into being, God in His "Zero" or un-manifest aspect was there & then He willed to create this universe. That "Zero" substance to which our Vedas call "God" is the source of Consciousness as well as Un-Conscious matter. He is also the source of Mind & Intellect. From this Zero aspect of God, on His will, He created two energies, one was called lower energy & other was called higher energy.

It is to be understood that it is only due to the WILL of GOD that whole creation takes place out of "ZERO". God in His un-manifest aspect just willed & hence the energies required to form this universe sprang out of "Zero" or "Nothing" or "God". Now it is these energies that are the focus of particle physics scientists. These scientists need to know that "God cannot be distilled in test tubes in laboratories" nor "God can come out of 'Atom-Smasher' experiment that has been started underground along the Swiss-French border to recreate the Big Bang. Pl. note that "Big Bang" started with the Will of God & also guided by His Super Intelligence. By just God's willing, Material Energy came into being which in turn created this vast infinite Space & later on out of Space came out the Air, Fire, Water & Earth. Unless until we consider & have faith in God with all His powers & His super Intelligence, we cannot appreciate the reality & truth about Big Bang.

"Earth, water, fire, air, ether, mind, intelligence and false ego—all together these eight constitute God's lower (insentient) nature or energy. Other than this there is another, superior or higher energy of God by which whole world is sustained & is in the form of "Life principle" energy or spiritual energy . All created beings (animate or inanimate) have their source in these two natures or energies.

Now out of the above above two energies, "Life principle" energy or Spiritual energy or also called Soul, is the one which is Un-manifest & cannot be externalized in any case. Though it is everlasting, present everywhere within the space, unchangeable, immovable and eternally the same but still it cannot be Manifested or externalized.

It is also called that God is a matter of faith & not of Intellect. The truth of God which lies within every atom of the creation, can be known by faith in HIM & by reading the philosophical books like "Vedas", "Upanishads", "Bhagwat Gita" etc. If someone really wants to experience such forces in nature & our creation, then that person needs to practice meditation & learn those techniques through which great Indian Yogis tuned their minds to Divinity & knew all those truths about God & Nature.

Below are verses of Bhagwat Gita which relate to creation of the universe & God:

"Sri Krishna said: At the beginning of Brahma’s day, all living entities become manifest from the un-manifest state, and thereafter, when the night falls, they are merged into the un-manifest again."

"Sri Krishna said: Again and again, when Brahma’s day arrives, all living entities come into being, and with the arrival of Brahma’s night they are helplessly annihilated."

"Sri Krishna said: O Arjuna, And entering the earth, it is I who sustain all beings by My power; & becoming the nectarean moon, I nourish all plants."

"Sri Krishna said: O Arjuna, I am the fire of digestion in the bodies of all living entities, and I join with the air of life, outgoing and incoming, to digest the four kinds of foodstuff."

"Sri Krishna said: O Arjuna, I am seated in everyone’s heart, and from Me come remembrance, knowledge and forgetfulness. By all the Vedas, I am to be known. Indeed, I am the compiler of Vedanta, and I am the knower of the Vedas."
Posted by Sancho at 4:04 PM 2 comments:

Posted by Sancho at 7:15 AM No comments:

Posted by Sancho at 7:11 AM No comments:

It is from a Bollywood Hindi Movie "Sargam". An old but soul touching song.

Posted by Sancho at 9:05 PM No comments:

Posted by Sancho at 7:00 PM No comments:

Posted by Sancho at 6:29 AM No comments: