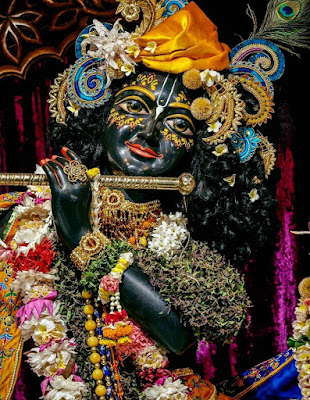 “Once there was a very poor devotee of the Lord. He wanted to serve the Lord but he was not having any money with him to buy something which he could offer to the Lord. In his dismay he said to the Lord, “I am so poor Lord that I do not have even simple food to serve you”.

On this Lord told him to offer Him some water only. Somehow there was no water also available with Him at that time so he showed his inability to serve water also to the Lord. On this, Lord asked him to serve Him with simple leaves of a tree but he could not even bring the leaves to the Lord as had got hurt in his leg & could not walk. On this, Lord told him to “Serve Him in his mind only by thinking & loving the Lord in his mind”. So the devotee thought of Lord & prayed Him in his mind with great Love & Lord became very happy with him.”

"Sri Krishna said: If one offers Me with love and devotion a leaf, a flower, fruit or even water, I will accept it."

"Sri Krishna said: Therefore, Arjuna, you should always think of Me in the form of God and at the same time carry out your prescribed duty of fighting. With your activities dedicated to Me and your mind and intelligence fixed on Me, you will attain Me without doubt."

So lets always think of Lord Krishna and do our prescribed duty. By doing so we shall always dwell our mind in the God. Living in this way we shall always be happy & in the end go to the Lord’s place where we shall get a blissful life forever.

Jai Sri Krishna
Posted by Sancho at 7:54 AM No comments:

Splendor of Sun comes from God 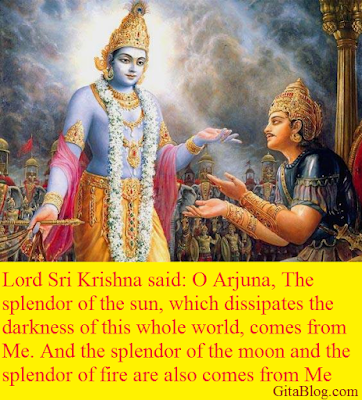 God is all powerful. He is almighty. He is the Lord of the Universe. Supreme God "Lord Krishna" Himself declares in Bhagwat-Gita that He himself is there as Splendor or Brilliance or Radiance of Sun.

Jai Shri Krishna
Posted by Sancho at 1:55 PM No comments: 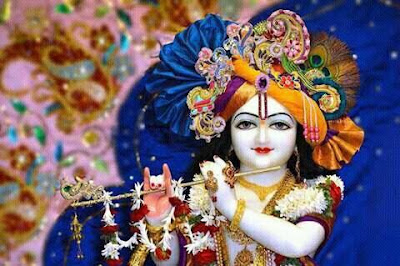 "In ancient India there was a king. In his kingdom there was a learned man who was very knowledgeable about Bhagavat Gita. Once he came to the court of King & offered the King to give him a talk on any verse of Bhagavat Gita. The king asked the learned man to explain the meaning of *Bhagwat Gita: Chapter Nine verse 22, selected by the king at random. The learned man spent lot of time explaining the meaning of the verse and the king did not point out any deficiency.
Neither of them spoke for a while. Then the king said: “O learned man, you did well. But that is not all that I expected. Study Bhagavat Gita again and come back after few days.” Learned man, bowed in reverence. After few days learned man again came to the king. King told him to explain the same Chapter Nine verse 22 as was chosen on previous occasion. The learned man did his best this time too.

King & the learned man were silent for a while. King asked the learned man “What were you thinking of after finishing your lecture up to this moment?” Learned man said “I was thinking what will be the result this time and what rewards I may receive.” King was much pleased with his honesty. King told him “I don’t doubt your ability. Krishna says that He will take care of the material and spiritual needs of those who constantly think of Him, without thinking of anything else. But you only thought of your reward. So, you did not trust Him!

A learned man like you should perform action without having any concern for the result. Any praise or reward from a king is also immaterial”

"Lord Sri Krishna says to Arjuna: But those who always worship Me with exclusive devotion, meditating on My transcendental form—to them I carry what they lack, and I preserve what they have."

So If a person has the above said assurance of the God, then one should make a resolve that one shall not let God slip out of his/her mind till he/she lives on this earth. Do not let anything else take control of your mind & let God be always on your mind. By doing so God shall always be with you in all of your circumstances & shall protect you always from all troubles of life. Then God shall be your Savior always.

Jai Sri Krishna
Posted by Sancho at 12:15 PM No comments: