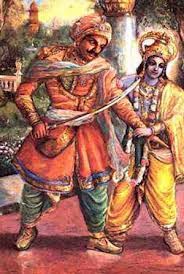 All religions of the world teach us to do good karmas, good acts & that we should not harm anybody by our acts. God is also with those people who live a life who do good karmas / acts in their life. God bestows on those people all the health, wealth, happiness & bliss of life. On the contrary, God gets very disturbed, very angry with those people who always do bad karmas / acts in their life. Once God gets angry with some person, then that person loses all the health, wealth & happiness in life. Below is the story of Ashwathama who was given a curse by Lord Krishna at the end of Mahabharata war. Story goes like that:

“Mahabharata war happened between the Pandavas and the Kauravas in 3139 BC or 5152 years before, from this year 2013 AD. The Pandavas, after winning the Mahabharata war, ruled Hastinapur for 36 years and 8 months until the beginning of Kaliyug in 3102 BC. In the end of the Mahabharata war when Duryodhana was killed by Bheema, then remaining Kauravas warriors (including Ashwathama) made a deadly attempt to kill the Pandavas brothers in the night when they would be sleeping. Ashwathama was the son of Dronacharya, Guru of Pandavas and the Kauravas.

Ashwathama had a Mani (gem) since his birth in his forehead which used to protect him from the fear of any snakes, ghosts, demigods and demons. Lord Sri Krishna asked Ashwatthama to surrender this Mani (gem) & took it from him. Lord Sri Krishna further said that “the wound caused by the removal of this Mani (gem) on his forehead will never heal and he will suffer from leprosy and wound in his forehead will always seep blood and Puss, thus arousing a foul smell till the end of Kaliyuga”. So in this way, Ashwathama will be in search of death every moment, and yet he will never die. At the end of Kali Yuga, Ashwathama shall meet God Sri Kalki, the tenth avatar of Lord Vishnu.”

So from the above story it is quite evident that we should never do any harm to anyone, as otherwise, God shall punish us badly. In Bhagwat Gita Lord Krishna says that:

"Sri Krishna said: O Arjuna, Thus perplexed by various anxieties and bound by a network of illusions, these evil people become too strongly attached to sense enjoyment and fall down into hell."

"Sri Krishna said: O Arjuna, "These haters, evil, cruel, & vilest among men, I ( God) repeatedly throw them into demoniacal wombs in this world."

"Sri Krishna said: O Arjuna, Attaining repeated birth amongst the species of demoniac life, such persons can never approach Me. Gradually they sink down to the most abominable, lowest type of existence."