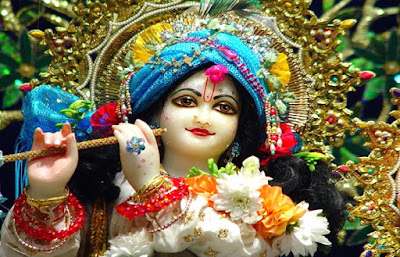 Here below is explained the Greatness of Chapter Sixteen of Bhagwat Gita. Read the story below to see, how all the sinful reactions are destroyed by just reading the Chapter 16 of the Bhagwat Gita.

“Lord Siva said, “My dear Parvati, I will now tell you the glories of the Sixteenth Chapter of Srimad Bhagwat Gita.

In Gujarat, there is a town of the name Sourastra (Surat). King Khadga-bahu had his kingdom there, where he lived just like another lndra, king of heaven. He kept a very passionate male elephant of the name Arimardana from whose temples liquid oozed due to his pride. One day that elephant, in a fit of anger, broke loose from his chains and started to destroy the elephant shed, after which he began running here and there, wildly chasing the citizens. Everyone fled as fast as possible. The elephant keepers immediately reported the news to the king and when the king heard, he went along with his son to the place, where the mad elephant was. King Khadga-bahu knew the art of controlling wild elephants. When the king reached the spot, where the elephant was running amok, he saw that many persons had been trampled and others were running here and there to avoid that elephant. Just then, as the king was watching that chaotic scene, he saw one Brahmin peacefully returning from taking his bath in the lake. That Brahmin was silently reciting the first three shlokas from the Sixteenth Chapter of Srimad Bhagwat Gita, which start with the word; abhayam (fearlessness). When the people saw that Brahmin walking towards the elephant, they tried to tell him not to go near him, but that Brahmin did not take any notice of them and walked straight up to that mad elephant and started to stroke him. When the elephant saw the Brahmin approaching, he immediately lost all anger and lay down peacefully.

After that Brahmin had patted the elephant for a few moments, he went peacefully on his way. When the king and all the citizens saw these amazing incidents, they were astonished. The king immediately went and fell at the feet of that Brahmin and inquired from him, “what austerities and worship have you performed to attain such peacefulness and amazing powers?” The Brahmin replied; “Daily I am reciting some shlokas from the sixteenth Chapter of the Srimad Bhagwat Gita.”

Lord Siva said; “That king requested the Brahmin to come to the palace, where he offered to him in charity, one hundred gold coins and requested that pious Brahmin to instruct him in the chanting of those verses from the Sixteenth Chapter of the Srimad Bhagwat Gita.

After King Khadga-bahu had been chanting those verses for some time, he one day along with his guards went to the place where that mad elephant was kept and ordered the elephant keepers to release him. At that, the citizens became upset with the king thinking that the elephant would begin to run amok again. The king went before that mad elephant, which immediately lay down and he started to stroke him. After that the king returned to his palace and installed his son on the throne and left for the forest, where he worshipped Lord Krishna by chanting those shlokas from the Sixteenth Chapter of Srimad Bhagwat Gita and very quickly he attained the lotus-feet of Lord Krishna.

Anyone who chants the Sixteenth Chapter of the Srimad Bhagwat Gita, however sinful he is, very quickly attains the same goal as King Khadga-bahu, the lotus-feet of Lord Krishna.

So that is the greatness of chapter Sixteen of Bhagwat Gita.”

Chapter Sixteen of Bhagwat Gita is entitled "The Yoga of Discrimination between the Divine and the Demoniacal Properties."

Bhagwat Gita: Chapter Sixteen (16) is entitled "The Yoga of Discrimination between the Divine and the Demoniacal Properties." This Chapter has a total of 24 verses.

Verses 1 to 5 describe about the Divine and the demoniacal Properties with their fruits.

Verses 6 to 20 describe about the marks of men possessed of the demoniacal Properties and their damnation described.

Verses 21 to 24 are about the Instruction to renounce the conduct opposed to the scriptures and exhortation to follow the scriptures.

Below are some verses from Chapter Sixteen of Bhagwat Gita :

"Sri Krishna said: O Arjuna, The demoniac person thinks: “So much wealth do I have today, and I will gain more according to my schemes. So much is mine now, and it will increase in the future, more and more. He is my enemy, and I have killed him, and my other enemies will also be killed. I am the lord of everything. I am the enjoyer. I am perfect, powerful and happy. I am the richest man, surrounded by aristocratic relatives. There is none so powerful and happy as I am. I shall perform sacrifices, I shall give some charity, and thus I shall rejoice.” In this way, such persons are deluded by ignorance."

"Sri Krishna said: O Arjuna, There are three gates leading to this hell—lust, anger and greed. Every sane man should give these up, for they lead to the degradation of the soul."

Jai Shri Krishna
Posted by Sancho at 11:16 AM