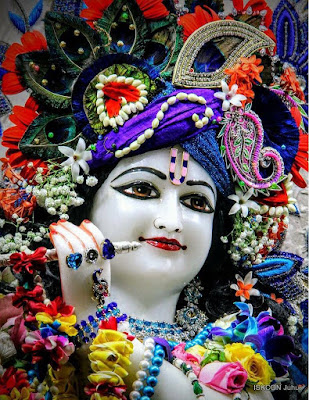 Here below is explained the Greatness of Chapter Fifteen of Bhagwat Gita. Read the story below to see, how all the sinful reactions are destroyed by just reading the Chapter 15 of the Bhagwat Gita.

“Lord Siva said, “My dear Parvati, now I will tell you the glories of the Fifteenth Chapter of the Srimad Bhagwat Gita, kindly listen carefully.

In Gauda-desa, there was a king of the name Narasingha. He was so powerful that he was able to defeat the demigods. The commander of his army was known by the name Sarabhmerund. He was very greedy and along with the prince, he planned to kill the king, and become the ruler of Gauda-desa. But before he was able to carry out his plan, he got cholera and very quickly died. After that he took his next birth as a horse in the country known as Sindhu. That horse was very beautiful and was very fast at running. He had all the qualities of a prize horse. One day, the son of a very rich man of Gauda-desa saw that horse and decided to buy him with the intention of selling him to the king of Gauda-desa. After having purchased that horse, he took him to the capital of Gauda-desa, When he reached the city he went straight to the palace of the king and requested the guards to inform the king of his arrival.

When he came before the king, the king inquired from him, “What has brought you here?” That business man replied, “Oh, king, in Sindhu I found a horse of the highest quality and it’s equal cannot be found in the whole universe. I paid very much money for it”. The king ordered, “Bring that horse immediately.” That horse was very quickly brought before the king who became very pleased with the high qualities of the horse. After having examined the horse, the king paid to that businessman whatever amount he had requested without thinking twice.

After some days the king decided to go hunting. Riding that horse, he set off for the forest, where he saw a deer, to which he immediately gave chase. Following behind that deer, he followed in every direction it turned. After some time he left the rest of his party far behind. After chasing for a long time and becoming very tired and thirsty, he stopped to take rest. He tied the horse to the branch of a tree and he himself sat down on a large rock.

After a little while he saw a piece of parchment blowing in the wind and land next to him on the rock. On that piece of parchment was written half a sloka of the Fifteenth Chapter of the Srimad Bhagwat Gita. The king started to read, and as the first sound came out of his mouth, that horse fell down to the ground and gave up that horse-body. He attained a transcendental four-armed form and immediately sat down in a flower-airplane, which had come from Vaikuntha to take him to that transcendental abode Vaikuntha.

The king noticed that close by; there was a beautiful ashram, which was surrounded by fruit-trees. Sitting in that ashram was a brahmin who had complete control over his senses. The king offered respects to that brahmin and with folded hands inquired from him, “How was it possible that my horse was able to attain Vaikuntha?” The brahmin, whose name was Vishnu-Sharma, replied, “Oh, king, previously, you had a commander-in chief of your army, who was known by the name Sarabhmerund. He had planned along with the prince to usurp you from your throne. Before he was able to, he got cholera and died, after which he took birth as that horse. By chance he heard some words from the Fifteenth Chapter of the Srimad Bhagwat Gita and attained Vaikuntha.”

The king offered his respects to that brahmin and returned to his capital and again and again read what was written on that parchment. After a short time he installed his son as the king of Gauda-desa and himself went off to the forest, where he recited regularly the Fifteenth Chapter of the Srimad Bhagwat Gita and very quickly, attained the lotus feet of Lord Vishnu.
So that is the greatness of chapter Fifteen of Bhagwat Gita.”

Chapter Fifteen of Bhagwat Gita is entitled "The Yoga of the Supreme Person."

Bhagwat Gita: Chapter Fifteen (15) is entitled "The Yoga of the Supreme Person." This Chapter has a total of 20 verses.

Verses 1 to 6 are about the description of the Universe as a tree and the means of God-Realization.

Verses 7 to 11 are about the Jivatma, or the Individual soul.

Verses 16 to 20 describe about the Perishable (bodies of all beings), the imperishable (Jivatma) and the Supreme Person.

Below are some verses from chapter Fifteen of Bhagwat Gita:

"Sri Krishna said: O Arjuna, It is said that there is an imperishable banyan tree that has its roots upward and its branches down and whose leaves are the Vedic hymns. One who knows this tree is the knower of the Vedas."

"Sri Krishna said: O Arjuna, The branches of this tree extend downward and upward, nourished by the three modes of material nature. The twigs are the objects of the senses. This tree also has roots going down, and these are bound to the fruit producing actions of human beings."

"Sri Krishna said: O Arjuna, The real form of this tree cannot be perceived in this world. No one can understand where it ends, where it begins, or where its foundation is. But with determination one must cut down this strongly rooted tree with the weapon of detachment. Thereafter, one must seek that place from which, having gone, one never returns, and there surrender to that God Lord from whom everything began and from whom everything has extended since time immemorial."

"Sri Krishna said: O Arjuna, Those who are free from false prestige, illusion and false association, who understand the eternal, who are done with material lust, who are freed from the dualities of happiness and distress, and who, un-bewildered, know how to surrender unto the God. That Person attain to that eternal kingdom."

"Sri Krishna said: O Arjuna, That God abode of Mine is not illumined by the sun or moon, nor by fire. Those who reach it never return to this material world."

"Sri Krishna said: O Arjuna, The living entities in this conditioned world are My eternal fragmental parts. Due to conditioned life, they are struggling very hard with the six senses, which include the mind."

"Sri Krishna said: O Arjuna, The living entity in the material world carries his different conceptions of life from one body to another as the air carries aromas. Thus he takes one kind of body and again quits it to take another."

"Sri Krishna said: O Arjuna, The living entity, thus taking another gross body, obtains a certain type of ear, eye, tongue, nose and sense of touch, which are grouped about the mind. He thus enjoys a particular set of sense objects."

"Sri Krishna said: O Arjuna, The foolish cannot understand how a living entity can quit his body, nor can they understand what sort of body he enjoys under the spell of the modes of nature. But one whose eyes are trained in knowledge can see all this."

"Sri Krishna said: O Arjuna, And entering the earth, it is I who sustain all beings by My power; & becoming the nectarean moon, I nourish all plants."

"Sri Krishna said: O Arjuna, I am the fire of digestion in the bodies of all living entities, and I join with the air of life, outgoing and incoming, to digest the four kinds of foodstuff."

"Sri Krishna said: O Arjuna, I am seated in everyone’s heart, and from Me come remembrance, knowledge and forgetfulness. By all the Vedas, I am to be known. Indeed, I am the compiler of Vedanta, and I am the knower of the Vedas."

"Sri Krishna said: O Arjuna, Besides these two, there is the greatest living personality, the God Soul, the imperishable Lord Himself, who has entered the three worlds and is maintaining them."

"Sri Krishna said: O Arjuna, Because I am transcendental, beyond both the fallible and the infallible, and because I am the greatest, I am celebrated both in the world and in the Vedas as that God Person."

"Sri Krishna said: O Arjuna, Whoever knows Me as the Supreme God, without doubting, is the knower of everything. He therefore engages himself in full devotional service to Me."

"Sri Krishna said: O Arjuna, This is the most confidential part of the Vedic scriptures, O sinless one, and it is disclosed now by Me. Whoever understands this will become wise, and his endeavors will know perfection."

Jai Shri Krishna
Posted by Sancho at 11:45 AM