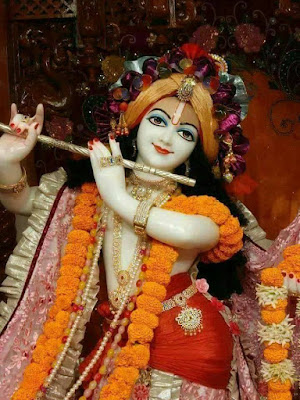 Here below is explained the Greatness of Chapter Fourteen of Bhagwat Gita. Read the story below to see, how all the sinful reactions are destroyed by just reading the Chapter 14 of the Bhagwat Gita.

“Lord Siva said “Oh, Parvati kindly hear from Me the glories of the Fourteenth Chapter of the Srimad Bhagwat Gita, with the greatest attention.

In Simhaldvip, there was a king of the name Vikram-Betual. One day, when he was going to the forest for hunting, he took his son and two hunting dogs along with him. When he reached the forest he released one dog to chase a rabbit. When that dog was chasing it, the rabbit looked as if it was flying. Running and running, that rabbit reached a beautiful hermitage, which was very peaceful. The deer were sitting happily under the shade of the trees. And the monkeys were joyfully eating the fruits of those trees. The cubs of the tigers were playing with the baby elephants, and the snakes were crawling over the peacocks. In this forest, the great sage Vatsa lived, who worshipped Lord Krishna by reciting the Fourteenth Chapter of the Srimad Bhagwat Gita. Near the ashram of sage Vatsa, one of his disciples was washing his feet while chanting the Fourteenth Chapter of Srimad Bhagwat Gita. The earth at that spot became wet. Just then that rabbit came running and slipped in the mud. Immediately that rabbit attained a heavenly body. An airplane came down, picked him up and took him off to the heavenly planets. After a moment, that dog arrived there in search of the rabbit, and he also slipped in the mud; gave up that dog body and attained a heavenly body and was also taken off to the heavenly planets.

Seeing all of this, the disciple of sage Vatsa started to laugh. King Vikram-Betal, having witnessed those amusing events inquired from that Brahmin, “How is it possible that the rabbit and dog went off to heaven in front of our eyes?” That Brahmin said, “in this forest, a great sage of the name Vatsa, who has completely conquered his senses, is always engaged in chanting the Fourteenth Chapter of the Srimad Bhagwat Gita. I am his disciple, and I am also by his grace always engaged in chanting the Fourteenth Chapter of the Srimad Bhagwat Gita. Due to that rabbit and dog after slipping in the mud, which had been made wet from the water, which had washed sage Vatsa’s feet, they both attained to the higher planets. Now I will tell you the reason why I was laughing; In Maharashtra, there is the town of the name Pratudhak. One Brahmin of the name Keshava had lived there. He was the most cruel of men. His wife’s name was Vilobbana. She was a very loose lady, who always enjoyed the company of other men. For this reason, her husband became very angry and killed her. In her next life she became that dog. And that Brahmin Keshava, due to his sinful activities became that rabbit.”

So that is the greatness of chapter Fourteen of Bhagwat Gita.”

Chapter Fourteen of Bhagwat Gita is entitled "The Yoga of Classification of the three Gunas."

Bhagwat Gita: Chapter Fourteen (14) is entitled "The Yoga of Classification of the three Gunas." This Chapter has a total of 27 verses.

Verses 1 to 4 are about the glory of Knowledge; Evolution of the World from "Prakriti" and "Purusha" (Matter and Spirit).

Verses 5 to 18 are about the qualities of Sattva, Rajas and Tamas described.

Verses 19 to 27 are about the means of God-Realization, and marks of the soul who has transcended the Gunas.

Below are some verses from chapter Fourteen of Bhagwat Gita:

"Sri Krishna said: O Arjuna, The total material substance, called Brahman, is the source of birth, and it is that Brahman that I impregnate, making possible the births of all living beings."

"Sri Krishna said: O Arjuna, It should be understood that all species of life, are made possible by birth in this material nature, and that I am the seed-giving father."

"Sri Krishna said: O Arjuna, Material nature consists of three modes—goodness, passion and ignorance. When the eternal living entity comes in contact with nature, he becomes conditioned by these modes."

"Sri Krishna said: O Arjuna, the mode of goodness, being purer than the others, is illuminating, and it frees one from all sinful reactions. Those situated in that mode become conditioned by a sense of happiness and knowledge."

"Sri Krishna said: O Arjuna, The mode of passion is born of unlimited desires and longings, and because of this, the embodied living entity is bound to material fruit producing actions."

"Sri Krishna said: O Arjuna, know that the mode of darkness, born of ignorance, is the delusion of all embodied living entities. The results of this mode are madness, indolence and sleep, which bind the conditioned soul."

"Sri Krishna said: O Arjuna, When there is an increase in the mode of ignorance, then darkness, inertia, madness and illusion are manifested."

"Sri Krishna said: O Arjuna, he who does not hate illumination, attachment and delusion when they are present or long for them when they disappear; who is unwavering and undisturbed through all these reactions of the material qualities, remaining neutral and transcendental, knowing that the modes alone are active; who is situated in the self and regards alike happiness and distress; who looks upon a lump of earth, a stone and a piece of gold with an equal eye; who is equal toward the desirable and the undesirable; who is steady, situated equally well in praise and blame, honor and dishonor; who treats alike both friend and enemy; and who has renounced all material activities—such a person is said to have transcended the three modes of nature."

"Sri Krishna said: O Arjuna, One who engages in full devotional service, unfailing in all circumstances, at once transcends the modes of material nature and thus comes to the level of Brahman."

"Sri Krishna said: O Arjuna, And I am the basis of the impersonal Brahman, which is immortal, imperishable and eternal and is the constitutional position of ultimate happiness."