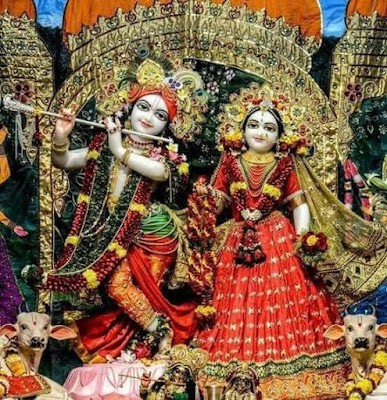 Here below is explained the Greatness of Chapter Seventeen of Bhagwat Gita. Read the story below to see, how all the sinful reactions are destroyed by just reading the Chapter 17 of the Bhagwat Gita.

In Gujarat, there is a town of the name Sourastra (Surat). King Khadga-bahu had his kingdom there, where he lived just like another lndra, king of heaven. He kept a very passionate male elephant of the name Arimardana from whose temples liquid oozed due to his pride. One day that elephant, in a fit of anger, broke loose from his chains and started to destroy the elephant shed.

King Khadga-bahu’s son had a servant by the name of Dushasan who was very crafty and exceptionally foolish. Dushasan made a bet with the prince that he could ride the mad elephant. After saying so he jumped upon the mad elephant and after going a few steps, the people there started requesting him, not to ride that dangerous elephant. But foolish Dushasan started to prod that elephant and used strong words to urge him on. Suddenly, that elephant became very angry and started to run wildly here and there. Unable to hold on, Dushasan fell to the ground. The elephant stomped on him and Dushasan died. After that he attained the body of an elephant in Simbaldwip, where he stayed in the king’s palace.

Thereafter, that poet sold that elephant for one hundred gold coins to the king of Malwa. After some time, that elephant contracted a terminal disease. When the elephant-keepers saw that the elephant had stopped eating and drinking, they reported the matter to the king. When the king found out, he went to the place of the elephant, along with the best of doctors. At that time, to the surprise of that king, the elephant started to speak, “My dear king you are very pious, and a strict follower of the Vedas. You always worship the lotus feet of Lord Vishnu. So you should know, that at this time, these medicines and doctors will be of no use. Neither any kind of charity or sacrifice will help at the time of death. If you care for me and want to help me, then bring someone, who daily recites the Seventeenth Chapter of Srimad Bhagwat Gita.”

As requested by that elephant, the king brought one great devotee, who regularly recited the Seventeenth Chapter of the Srimad Bhagwat Gita. That devotee, while chanting the Seventeenth Chapter, sprinkled water on the elephant at which time he gave up his elephant body and attained a four-armed form, similar to that of Lord Vishnu. He immediately sat down in a flower airplane, which had been sent to take him to Vaikuntha. While sitting in that airplane, the king inquired from him about his previous birth, and Dushasan, after telling him everything, left for Vaikuntha. After which, that best of men, the king of Malwa, started regularly reciting the Seventeenth Chapter of Srimad Bhagwat Gita. After a short time he attained the lotus feet of Lord Krishna.

So that is the greatness of chapter Seventeen of Bhagwat Gita.”

Chapter Seventeen of Bhagwat Gita is entitled "The Yoga of Classification of the Threefold Faith."

Bhagwat Gita: Chapter Seventeen (17) is entitled "The Yoga of Classification of the Threefold Faith." This Chapter has a total of 28 verses

Verses 1 to 6 are about the Discussion on Faith and on the Fate of men who perform austere penance not enjoined by the scripture.

Verses 7 to 22 are about the different kinds of foods, sacrifices, penances and charity which are described herein.

Verses 23 to 28 describe about the meaning and intention of uttering "Om Tat Sat".

Below are some verses from Chapter Seventeen of Bhagwat Gita :

"Sri Krishna said: O Arjuna, Charity given out of duty, without expectation of return, at the proper time and place, and to a worthy person is considered to be in the mode of goodness."

"Sri Krishna said: O Arjuna, From the beginning of creation, the three words "Om Tat Sat" were used to indicate the Absolute Truth. These three symbolic representations were used by Brahmins while chanting the hymns of the Vedas and during sacrifices for the satisfaction of the God."

"Sri Krishna said: O Arjuna, Without desiring fruit producing results, one should perform various kinds of sacrifice, penance and charity with the word Tat. The purpose of such transcendental activities is to get free from material entanglement."

"Sri Krishna said: O Arjuna, The Absolute Truth is the objective of devotional sacrifice, and it is indicated by the word Sat. The performer of such sacrifice is also called Sat, as are all works of sacrifice, penance and charity which, true to the absolute nature, are performed to please the God."

"Sri Krishna said: O Arjuna, Anything done as sacrifice, charity or penance without faith in the God, is impermanent. It is called Asat and is useless both in this life and the next."

Jai Shri Krishna
Posted by Sancho at 9:41 AM