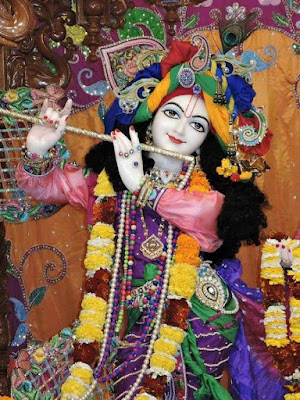 Here below is explained the Greatness of Chapter Eighteen of Bhagwat Gita. Read the story below to see, how all the sinful reactions are destroyed by just reading the Chapter 18 of the Bhagwat Gita.

"Lord Siva said; “My dear Parvati, Now, listen to the glories of the Eighteenth Chapter of Srimad Bhagwat Gita, which is higher than the Vedas and the giver of unlimited bliss. When it enters into one’s ears it destroys all material desires. For the pure devotee, it is divine nectar, it is Lord Vishnu’s very life and it is a solace to the hearts of Lord Indra and the demigods as well as the great yogis headed by Sanak and Sananda.

One who recites it, he sends the messengers of Yamaraja far away. There is no other recitation, which can so quickly destroy all the sins and free one from the threefold miseries of this world. Now listen with great devotion.

On the topmost peak of Mount Meru is Amaravati, which was built by Vishvakarma. In that heavenly kingdom, Lord Indra along with his wife Saci is served by the demigods. One day while Lord Indra was sitting peacefully, he saw that one very beautiful person had arrived there, whom the servants of Lord Vishnu were serving. When. Lord Indra saw that beautiful young person; he immediately fell from his throne unto the ground. At that time those demigod who had been worshipping Indra picked up the crown that he was wearing and placed it on the head of that new beautiful person. After that, all the demigods and other denizens of the heavenly planets started to perform artee and sing wonderful songs to that new King Indra. The great rishis came there and offered their blessings and chanted Vedic mantras and the Gandharvas and Apsaras started to sing and dance joyfully. In this way, the new Indra, who had not performed the usual one hundred horse sacrifices, started to enjoy hundreds of different types of services rendered by the demigods and other denizens of the heavenly planets. When the old Indra saw this he became very surprised.

He started to think to himself, “This person here has never built wells or dug kunds or planted trees for the welfare of others, and when there were droughts, he did not provide grains in charity. He never performed any fire-sacrifices or great charities in the holy places. So how has he managed to attain my seat?” The old Indra, feeling greatly disturbed in his mind, left to the ocean of milk to pray to Lord Vishnu. When he managed to obtain darshan of Lord Vishnu, he asked Him “My dear Lord Vishnu, in the past I performed many sacrifices and other pious activities, for which I was installed as the Lord of heaven. But at this time another person has come there and taken my place as the king of heaven. This person in his life never performed any great, wonderful pious activities, nor had he performed any great Vedic sacrifices. So, how is it possible that he has managed to obtain my throne?”

At that time Lord Vishnu said, “My dear Indra, That great soul has performed the recitation daily of the Eighteenth Chapter of the Srimad Bhagwat Gita. Everyday during his life, he recited five shlokas from this Chapter, and because of that activity he has attained the results of all sorts of pious activities and yajnas and after enjoying for many years as the king of heaven, he will attain to My personal abode. If you perform the same activity of reciting the Eighteenth Chapter of Srimad Bhagwat Gita, you can also attain My divine abode.”

After hearing Lord Vishnu’s words, Lord Indra took the form of a Brahmin and went to the bank of the Godavari River, where he saw the town of Kalegrani, which is very sacred. At that place, the Supreme Lord in His form known as Kalesva, resides. Close to this town, on the bank of the Godavari river, one very pure Brahmin was sitting, who was very merciful and had understood the topmost goal and secret of the Vedic literatures. Daily he would sit at that spot and recite shlokas of the Eighteenth Chapter of Srimad Bhagwat Gita. When Lord Indra saw him he became very happy. He immediately fell at his lotus-feet and requested him to teach him the Eighteenth Chapter of Srimad Bhagwat Gita. After Lord Indra had practiced the recitation, of the Eighteenth Chapter of Srimad Bhagwat Gita for sometime he managed to attain the topmost place of Vishnuloka. When he attained that place, he realized that the pleasure he had enjoyed as King Indra, along with the demigods, was nothing in comparison.

My dear Parvati, for this reason, the great sages, especially chant this Eighteenth Chapter of Srimad Bhagwat Gita and by so doing very quickly attain the lotus-feet of Lord Vishnu.

Anyone who hears or studies this Gita Mahatmya very quickly destroys all sins, which he has accumulated. And that person, who remembers this discourse with great faith attains the results of all kinds of pious activities and great sacrifices, and after enjoying all worldly opulences, attains the abode of Lord Vishnu.

So that is the greatness of chapter Eighteen of Bhagwat Gita.”

Chapter Eighteen of Bhagwat Gita is entitled "The Yoga of Liberation through the Path of Knowledge and Self-Surrender."

Bhagwat Gita: Chapter Eighteen (18) is entitled "The Yoga of Liberation through the Path of Knowledge and Self-Surrender." This Chapter has a total of 78 verses.

Verses 1 to 12 discusses the subject of Tyaga or Relinquishment.

Verses 13 to 18 discusses the cause of Karma according to the Sankhya system.

Verses 19 to 40 are about the Classification of Knowledge, Action, Doer, Reason, Firmness and Joy according to the three Gunas.

Verses 41 to 48 describe about the Duties attaching to each Caste and the fruits of their performance.

Verses 49 to 55 describe about the path of Knowledge.

Verses 56 to 66 describe about the path of Karmayoga or Selfless Action, together with Devotion.

Verses 67 to 78 describe about the glory of Gita/Bhagwat Gita/Bhagwad Gita.

Below are some verses from Chapter Eighteen of Bhagwat Gita :

"Sri Krishna said: O Arjuna, when one performs his prescribed duty only because it ought to be done, and renounces all material association and all attachment to the fruit, his renunciation is said to be in the mode of goodness."

"Sri Krishna said: O Arjuna, It is better to engage in one’s own occupation, even though one may perform it imperfectly, than to accept another’s occupation and perform it perfectly. Duties prescribed according to one’s nature are never affected by sinful reactions."

"Sri Krishna said: O Arjuna, Every endeavor is covered by some fault, just as fire is covered by smoke. Therefore one should not give up the work born of his nature, even if such work is full of fault."

"Sri Krishna said: O Arjuna, The Supreme God is situated in everyone’s heart, and is directing the wanderings of all living entities, who are seated as on a machine, made of the material energy."

"Sri Krishna said: O Arjuna, surrender unto God fully. By His grace you will attain transcendental peace and the supreme and eternal abode."