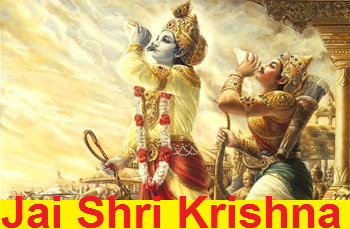 Here below is explained the Greatness of Chapter Eight of Bhagwat Gita. Read the story below to see, how all the sinful reactions are destroyed by just reading the Chapter 8 of the Bhagwat Gita.

“In the olden times, there was a brahmin by the name of Bhava-Sharma who used to live in the important town of Amardaka-pura. He had taken a harlot as his wife, and he enjoyed meat-eating, intoxication, stealing, adultery and hunting. Once, after a bout of drinking wine, Bhava-Sharma contracted a serious disease, and after many days of suffering he died and attained the body of a date palm tree.

One day, two ghosts (Brahm-raaksasa) took shelter beneath this palm tree after unceasingly wandering over the earth, hungry and thirsty. Due to their activities in a previous life, they had attained these ghostly bodies. One of them had once been the brahmin Kusibala, who had been conversant with many branches of knowledge and had been learned in the Vedas. The other ghost had been his wife, Kumati. Kusibala and his evil-minded wife, both greedy, had been in the habit of collecting much charity daily without ever giving charity to other brahmins. When they died they both became ghosts.

So while these two ghosts were resting under the palm tree, the one who had been the wife asked her former husband how to atone. He replied that by having knowledge of Brahm, the Self and Fruitive activities this could be accomplished. Upon hearing this, his wife inquired, “What is Brahm? What is the Self? What are fruitive activities?” Because she spoke in Sanskrit, she coincidentally chanted the first two lines of the eighth chapter of the Bhagwat Gita.

Upon hearing these lines, Bhava-Sharma became freed from his tree body and again attained the body of a sinless brahmin. And suddenly a spiritual airplane appeared to take the ghostly husband and wife back to Vaikuntha.Thereafter Bhava-Sharma wrote down the two lines from the Bhagwat Gita and he went to Kasipuri with the intention of worshiping Lord Krishna by performing great austerities and continuously chanting these two lines: kim tad brahm kim adhyatmam, kim karma purushottama.

After some time, in Vaikuntha Lord Vishnu once unexpectedly arose from His rest. Lakshmi devi inquired with folded hands what had awakened Him. Lord Vishnu said. “My dear Lakshmi, in Kasipuri, on the bank of the river Ganges, My devotee is performing great austerities by continuously chanting half a verse of the eighth chapter of the Bhagwat Gita. For a long time I have been thinking how to reward his devotion.” Lord Shiva then told Parvati that Bhava-Sharma pleased Lord Vishnu so much that the Lord awarded him a place in Vaikuntha to engage eternally in the service of His lotus feet. Moreover, all his ancestors also attained the lotus feet of Lord Vishnu."

So that is the greatness of Eighth chapter of Bhagwat Gita.”

Chapter Eight of Bhagwat Gita is entitled "The Yoga of the Indestructible Brahma."

Bhagwat Gita: Chapter Eight (8) is entitled "The Yoga of the indestructible Brahma." This Chapter has a total of 28 verses.

Verses 1 to 7 are about the answer to Arjuna's seven questions on Brahma, Adhyatma and Karma (Action), etc.

Verses 8 to 22 discusses the subject of Bhaktiyoga.

Verses 23 to 28 describes about the Bright and Dark paths.

Below are some verses from Eighth chapter of Bhagwat Gita:

"Arjuna said: O Lord Sri Krishna, what is Brahman? What is the self? What are fruitive activities? What is this material manifestation? And what are the demigods? Please explain this to me."

"Arjuna said: Who is the Lord of sacrifice, and how does He live in the body, O Krishna? And how can those engaged in devotional service know You at the time of death?"

"Sri Krishna said: The indestructible, transcendental living entity is called Brahman, and his eternal nature is called adhyatma, the self. Action pertaining to the development of the material bodies of the living entities is called karma, or fruitive activities."

"Sri Krishna said: O Arjuna, the physical nature, which is constantly changing, is called adhibhuta [the material manifestation]. The universal form of the Lord, which includes all the demigods, like those of the sun and moon, is called adhidaiva. And I, the Supreme Lord, represented as the Super soul in the heart of every embodied being, am called adhiyajna [the Lord of sacrifice]."

"Sri Krishna said: And whoever, at the end of his life, quits his body, remembering Me alone, at once attains My nature. Of this there is no doubt."

"Sri Krishna said: Whatever state of being one remembers when he quits his body, O Arjuna, that state he will attain without fail."

"Sri Krishna said: Therefore, Arjuna, you should always think of Me in the form of Krishna and at the same time carry out your prescribed duty of fighting. With your activities dedicated to Me and your mind and intelligence fixed on Me, you will attain Me without doubt."

"Sri Krishna said: He who meditates on Me as the Lord of the universe, his mind constantly engaged in remembering Me, un-deviated from the path, he, O Arjuna, is sure to reach Me."

"Sri Krishna said: One should meditate upon the Supreme human being as the one who knows everything, as He who is the oldest, who is the controller, who is smaller than the smallest, who is the maintainer of everything, who is beyond all material conception, who is inconceivable, and who is always a human being. He is luminous like the sun, and He is transcendental, beyond this material nature."