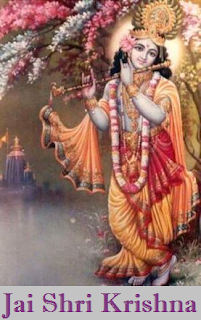 Here below is explained the Greatness of Chapter Nine of Bhagwat Gita. Read the story below to see, how all the sinful reactions are destroyed by just reading the Chapter 9 of the Bhagwat Gita.

“In the olden times, there was a town of the name Mahismati on the bank of the Narmada River, where one brahmin of the name Madhava lived. That brahmin very strictly followed all the injunctions of the Vedas and possessed all the good qualities of the brahminical class. Due to his being so learned, he would receive a lot of charity. And with his accumulated wealth, he started to perform a great fire-sacrifice. One day, for offering in sacrifice, one goat was bought, and when they started to cleanse that goat in preparation for it’s sacrifice, to everyone’s great surprise the goat started to laugh and in a loud voice said; “Oh, brahmin, what is the benefit of performing so many fire-sacrifices that simply bind us up in the wheel of birth and death. Just see my position due to my performing so many fire-sacrifices.”

When everyone gathered there heard the words of the goat, they became curious, and that brahmin inquired with folded hands, “how did you become a goat? In your previous life, which caste did you belong to and what activities did you perform?” The goat replied, “Oh, brahmin, in my previous birth I was born in a very pure brahmin family and I very carefully performed all the ritualistic activities enjoined in the Vedas. One day my wife wished to worship Goddess Durga, so that our child might he cured of his disease, for this purpose she requested me to bring one goat. When we sacrificed the goat at the temple of Goddess Durga; the goat cursed me, “Oh, sinful, lowest of all, you wish to make my children fatherless. For this reason you will also take birth as a goat.”

Oh, Madhava, when the time for my death came, I attained this body of a goat but by the grace of Lord Govinda I could remember my previous births. If you wish to hear one other interesting story then I will tell you. In the place known as Kurukshetra which is capable of giving liberation, there once lived a king of the name Chandra-Sharma, who was in the dynasty of the sun-god. Once, at the time of the solar-eclipse, the king wished to give charity to one brahmin. Included in that charity was a Sudra, whose body was completely black. After going with his priest and taking bath in the sacred lake, putting on clean cloth and applying sandalwood, he returned to his place. With devotion he gave charity to a qualified Brahmin.

Upon hearing this the king learned the chanting of the Shrimad Bhagwat Gita, Ninth Chapter, from the brahmin. Gradually he managed to attain the lotus-feet of Lord Govinda. When Madhava heard this discourse from the goat, he immediately freed the goat and started to engage in reciting the Ninth Chapter of Shrimad Bhagwat Gita daily and thus he also gained the lotus-feet of Lord Govinda.

So that is the greatness of Ninth chapter of Bhagwat Gita.”

Verses 1 to 6 are about the subject of Jnana (Knowledge) with its glory described.

Verses 7 to 10 discusses about the origin of the world.

Verses 11 to 15 are about the condemnation of men of the demoniacal nature, who despise God and the method of Bhajana of men possessed of the divine nature.

Verses 16 to 19 are about the description of God, as the soul of everything, and His glory.

Verses 20 to 25 is about the fruits of worship with a motive and without motive.

Verses 26 to 34 describes about the glory of Devotion practiced disinterestedly.

Below are some verses from Ninth chapter of Bhagwat Gita:

"Sri Krishna said: Those who are not faithful in this devotional service cannot attain Me, O Arjuna. Therefore they return to the path of birth and death in this material world."

"Sri Krishna said: And yet everything that is created does not rest in Me. Behold My mystic opulence! Although I am the maintainer of all living entities and although I am everywhere, I am not a part of this cosmic manifestation, for My Self is the very source of creation."

"Sri Krishna said: O Arjuna, at the end of the millennium all material manifestations enter into My nature, and at the beginning of another millennium, by My potency, I create them again."

"Sri Krishna said: Fools deride Me when I descend in the human form. They do not know My transcendental nature as the Supreme Lord of all that be."

"Sri Krishna said: I am the father of this universe, the mother, the support and the grandsire. I am the object of knowledge, the purifier and the syllable Om. I am also the Rig, the Sama and the Yajur Vedas."

"Sri Krishna said: But those who always worship Me with exclusive devotion, meditating on My transcendental form—to them I carry what they lack, and I preserve what they have."

"Sri Krishna said: If one offers Me with love and devotion a leaf, a flower, fruit or water, I will accept it."

"Sri Krishna said: In this way you will be freed from bondage to work and its auspicious and inauspicious results. With your mind fixed on Me in this principle of renunciation, you will be liberated and come to Me."

"Sri Krishna said: I envy no one, nor am I partial to anyone. I am equal to all. But whoever renders service unto Me in devotion is a friend, is in Me, and I am also a friend to him."

"Sri Krishna said: Even if one commits the most abominable action, if he is engaged in devotional service he is to be considered saintly because he is properly situated in his determination."

"Sri Krishna said: Engage your mind always in thinking of Me, become My devotee, offer obeisance's to Me and worship Me. Being completely absorbed in Me, surely you will come to Me."