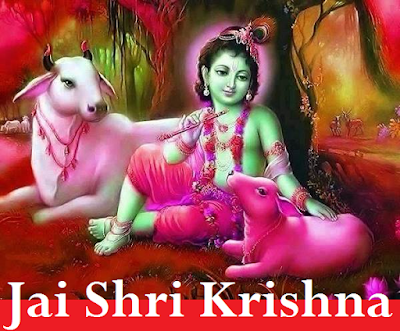 Here below is explained the Greatness of Chapter Seven of Bhagwat Gita. Read the story below to see, how all the sinful reactions are destroyed by just reading the Chapter 7 of the Bhagwat Gita.

“In the olden times, there was a brahmin by the name of Shanku-karna, who was occupied as a businessman. Shanku-karna amassed so much wealth that even kings visited his house to dine. But the miserly Shanku-karna kept some of his wealth buried, concealed from his relatives, and he never performed devotional acts or the rituals for his forefathers. Once, after his fourth marriage, Shanku-karna took rest for the night. While asleep, he received a snakebite and died. Later he attained the body of a snake-ghost, and he came to reside at the place where he had buried his wealth. Eventually he became tired of being trapped in a ghostly body, so he appeared to his sons in a dream and asked their help.

When his lazy sons woke up, they talked about their dream. Then one of them took a spade and went to the place his father had indicated. The son did not know exactly where to find the buried wealth, but he searched greedily until he found a snake hole. As he started to dig, suddenly a huge and appalling snake crawled out and asked, “Who are you? Who sent you to dig here?” Trembling for his life, the son replied: “It is me, your son, Shiva, to whom you appeared in a dream.”

The snake laughed and asked, why you indeed as his son, had not performed the necessary rituals to free him from the hellish life. The son inquired how to do this. His father replied, “Not by any kind of charity or austerity but only by recitation from the seventh chapter of the Bhagwat Gita will I become free from birth and death.” The father instructed his son to invite a brahmin to recite the seventh chapter during a ceremony to offer oblations to the forefathers. As this ceremony took place, the brahmin chanted the seventh chapter of the Bhagwat Gita, and Shanku-karna gave up his frightful body and attained a divine four-armed form. Before he left for Vaikunth Dham he blessed his sons and told them the location of his wealth.

After digging it up, the sons, whose minds had become fixed in devotion to Lord Krishna, used the wealth to build temples, dig wells and holy ponds, and distribute sanctified food. Moreover, the sons daily recited the seventh chapter of the Bhagwat Gita and quickly attained the devotion of Lord Krishna. Anyone who recites or hears this chapter will be freed from all the sinful reactions.

So that is the greatness of Seventh chapter of Bhagwat Gita.”

Verses 1 to 7 describes the Wisdom with real Knowledge of Manifest Divinity.

Verses 8 to 12 describes about the Inherence of God in all objects as their Cause.

Verses 13 to 19 are about the Condemnation of men of demonical nature and Praise of devotees.

Verses 20 to 23 are about answering the question of worship of other gods.

Verses 24 to 30 are about the Condemnation of men, who are ignorant of the glory and true nature of God, and approbation of those who know them.

Below are some verses from Seventh chapter of Bhagwat Gita:

"Sri Krishna said: All these devotees are undoubtedly magnanimous souls, but he who is situated in knowledge of Me I consider to be just like My own self. Being engaged in My transcendental service, he is sure to attain Me, the highest and most perfect goal."

"Sri Krishna said: After many births and deaths, he who is actually in knowledge surrenders unto Me, knowing Me to be the cause of all causes and all that is. Such a great soul is very rare."

"Sri Krishna said: O Arjuna, as the Lord of the universe, I know everything that has happened in the past, all that is happening in the present, and all things that are yet to come. I also know all living entities; but Me no one knows."

"Sri Krishna said: Intelligent human beings who are endeavoring for liberation from old age and death take refuge in Me in devotional service. They are actually Brahman because they entirely know everything about transcendental activities."