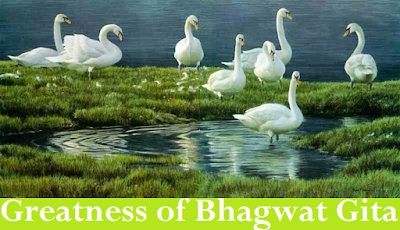 Here below is explained the Greatness of Chapter Six of Bhagwat Gita. Read the story below to see, how all the sinful reactions are destroyed by just reading the Chapter 6 of Bhagwat Gita.

“In the olden times, there was a beautiful town named Pratishthan-pura on the bank of the Godavari River. There was a popular king named Jana-shrutee who ruled over there. He had many good qualities, and he daily performed an opulent fire sacrifice and many other pious acts, like he gave charity, dug wells and lakes, and so on.

Once some demigods went to the king’s residence in the form of swans. As they flew above his palace, the demigod Bhadra-shwa heard several swans mention Jana-shrutee ’s greatness, but Bhadra-shwa laughed and asked, “Is Jana-shrutee Maharaja as powerful as the great sage Raikwa.”

The king happened to hear the swans’ conversation from the roof of his high palace, and then went down in a happy mood and ordered his charioteer to go out and find Raikwa. Thus ordered, the charioteer departed for holy places. Upon arriving in Kashmir, he saw the sage sitting on a small cart near the door of a temple.

The charioteer fell at Raikwa’s feet and asked him where he lived, what his full name was, and why he was sitting there. Raikwa thought for some time and replied, “I am fully satisfied. I do not require anything.” The charioteer understood and returned at once to Pratishthan-pura. When charioteer arrived, he offered his respects to the king and informed him of all that had taken place. The king then decided to visit the great sage Raikwa. Seated on a beautiful chariot filled with valuable gifts, he left for Kashmir.

When the king finally met Raikwa and had fallen at his feet, he placed many silks and jewels before the sage. The sage, however, became angry and said, “You foolish king! Take these useless things away. Put them on your chariot and leave this place at once.” With great devotion the king fell at Raikwa’s feet again and begged to be forgiven. He asked, “O sage, how have you attained such a level of renunciation and devotion to the Lord?”

Pleased by the king’s submissive attitude,Raikwa replied that he had daily recited the sixth chapter of the Bhagwat Gita. There-after, King Jana-shrutee also began to recite it daily. After some time a flower airplane appeared and took the king to Vaikuntha. Raikwa, in the meantime, had also gone to Vaikuntha, where he engaged in the service of the lotus feet of the Supreme Lord. So that is the greatness of Sixth chapter of Bhagwat Gita.”

Chapter Six of Bhagwat Gita is entitled "The Yoga of Self control."

Bhagwat Gita: Chapter Six (6) is entitled "The Yoga of Self control."

This Chapter has a total of 47 verses.

Verses 1 to 4 are about the "Karmayoga" or the Yoga of disinterested Action,described; marks of one who has attained Yoga.

Verses 5 to 10 urges one to uplift the self; describes the marks of the God-Realized soul.

Verses 11 to 32 details the description of Dhyanayoga.

Verses 33 to 36 discusses about the question of Mind-control.

Verses 37 to 47 discusses the fate of one who falls from Yoga; the glory of Dhyanayoga described herewith.

Below are some verses from Sixth chapter of Bhagwat Gita:

"Sri Krishna said: One should engage oneself in the practice of yoga with determination and faith and not be deviated from the path. One should abandon, without exception, all material desires born of mental speculation and thus control all the senses on all sides by the mind."

"Sri Krishna said: Gradually, step by step, one should become situated in trance by means of intelligence sustained by full conviction, and thus the mind should be fixed on the self alone and should think of nothing else."

"Sri Krishna said: From wherever the mind wanders due to its flickering and unsteady nature, one must certainly withdraw it and bring it back under the control of the self."

"Sri Krishna said: The yogi whose mind is fixed on Me verily attains the highest perfection of transcendental happiness. He is beyond the mode of passion, he realizes his qualitative identity with the God, and thus he is freed from all reactions to past deeds."

"Sri Krishna said: Thus the self-controlled yogi, constantly engaged in yoga practice, becomes free from all material contamination and achieves the highest stage of perfect happiness in transcendental loving service to the Lord."

"Sri Krishna said: A true yogi observes Me in all beings and also sees every being in Me. Indeed, the self-realized human being sees Me, the same God Lord, everywhere."

"Sri Krishna said: For one who sees Me everywhere and sees everything in Me, I am never lost, nor is he ever lost to Me."

"Sri Krishna said: Such a yogi, who engages in the worshipful service of the Super soul, knowing that I and the Super soul are one, remains always in Me in all circumstances."

Jai Shri Krishna
Posted by Sancho at 10:39 AM