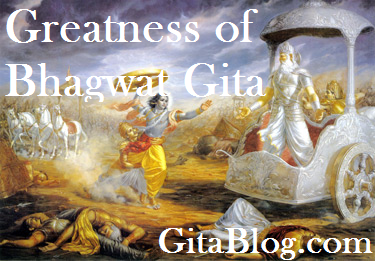 Here below is explained the Greatness of Chapter Five of Bhagwat Gita. Read the story below to see, how all the sinful reactions are destroyed by just reading the Chapter 5 of  Bhagwat Gita.

“In the olden times, there was a town named Puru-kutsapura. There lived a Brahmin called Pingla. Although well educated, he lacked interest in studying, and so when he reached youth he gave up his educational pursuits. Instead, he learned to play musical instruments and sing and dance. He became so skilled and famous that the king invited him to live in the palace. But his intimacy with the king made him proud, and he became fond of criticizing others; worse, he took up intoxication and adultery.

Despite his promiscuity, Pingla had a wife named Aruna, who had been born in a low-class family. She too was lusty and promiscuous, and when Pingla discovered this, Aruna murdered him.Thereafter she enjoyed a promiscuous life with other men, but she soon contracted a disease. Her youthful body therefore became ugly, and before long she died. Both husband and wife fell into the deepest regions of hell and suffered tremendously. In their next lives, they both took birth as birds, Pingla a vulture and Aruna a parrot.

One day while the parrot searched for food, the vulture attacked her. The vulture could somehow remember his past life, and he understood that the parrot had been his wife. After a flurry of fighting, both birds fell down and drowned in a human skull filled with water. They were brought before Yamraja, and because they vividly remembered their sins, they were frightened. But Yamraja said, “You are now freed of all sinful reactions and may go to Vaikuntha.”

Dumbfounded, Pingla and Aruna asked Yamraja how persons of their caliber had the right to enter Vaikuntha. Then Yamraja told them about a pure devotee of Lord Vishnu who had daily recited the fifth chapter of the Bhagwat Gita. When this devotee, who was completely free of lust, left his body, he went straight to Vaikuntha. Because of his recitations of Bhagwat Gita his body had also become pure. Therefore, when Pingla and Aruna, as birds, had touched his skull, both of them had achieved freedom from sinful reactions and attained the right to enter Vaikuntha.

After Pingla and Aruna heard the glories of the fifth chapter of the Bhagwat Gita they became overjoyed, and a flower airplane arrived to take them to the spiritual world. So that is the greatness of Fifth chapter of Bhagwat Gita.”

Chapter Five of Bhagwat Gita is entitled "The Yoga of Action & Knowledge."

Bhagwat Gita: Chapter Five (5) is entitled "The Yoga of Action & Knowledge." This Chapter has a total of 29 verses.

Verses 1 to 6 are about the "Sankhyayoga" & the Yoga of disinterested action.

Verses 7 to 12 are about the marks of a Sankhyayogi & the Nishkam Karmayogi - their glories described.

Verses 13 to 26 are about the Jnanyoga, or the Yoga of Knowledge.

Verses 27 to 29 are about the Dhyanayoga, or meditation, together with Devotion described.

Below are some verses from Fifth chapter of Bhagwat Gita:

"Sri Krishna said: One who neither hates nor desires the fruits of his activities is known to be always renounced. Such a human being, free from all dualities, easily overcomes material bondage and is completely liberated, O mighty-armed Arjuna."

"Sri Krishna said: One who performs his duty without attachment, surrendering the results unto the God, is unaffected by sinful action, as the lotus leaf is untouched by water."

"Sri Krishna said: The steadily devoted soul attains unadulterated peace because he offers the result of all activities to Me; whereas a human being who is not in union with the Divine, who is greedy for the fruits of his labour, becomes entangled."

"Sri Krishna said: A human being who neither rejoices upon achieving something pleasant nor laments upon obtaining something unpleasant, who is self-intelligent, who is not bewildered, and who knows the science of God, is already situated in God."

Jai Shri Krishna
Posted by Sancho at 11:35 AM