Greatness of Chapter One of Bhagwat Gita 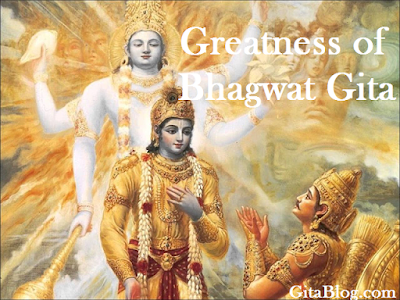 Bhagwat Gita is a very Pious Book. Reading to it is considered a great Pious Karma & all the sinful results of Past Lives & this life are destroyed if one reads to the Bhagwat Gita regularly. Even if one recites to a single verse of it, one attains great virtue due to that, what to talk of reading full chapters of it. Here it is discussed about Chapter one of Bhagwat Gita & the virtues related to reading this first chapter. Here below is a Story which describes the Greatness of reading or Listening to the Chapter one of Bhagwat Gita.

“In the olden days in India, there was a man named Susharma, who was born in a pious Brahmin family. When Susharma grew up he went into bad company & started doing sinful acts, He became a person full of wickedness & a man devoid of piety. He used to feel a pleasure while hurting others. For his livelihood he used to collect the dry leaves from a garden & used to sew these together to make plates and cups. One day Susharma entered the garden of a very pious sage to collect leaves, and a snake slithered in and killed him. Because of all his sins, he was cast into many hells and suffered there for quite a long-time.

Later on, he received the body of a bull. As a bull, he was purchased by a very crippled peasant and for many years he had to carry heavy loads. One day, when the bull was carrying very heavy load on his back, he fell unconscious. Bystanders felt very sorry for the bull and bestowed upon him some results of their pious acts. One prostitute was also standing there but she doubted if she had ever performed any pious acts which she could offer to the dying bull. So he just made a prayer in her mind & offered all the pious credits that she might have earned accidently in her life to the bull.

After the bull died and entered the abode of Yamaraja (Lord of death), the god of death, Yamaraja, informed him, “Now you are freed from the reactions to all your previous sinful deeds because a prostitute gave you her pious credits.”

In his next life Susharma again took birth as an elevated pious Brahmin, but this time he could remember his past lives. He decided to find the prostitute who had caused his liberation from hell in last birth. When he found her, he asked her what pious acts she had performed. The prostitute replied him that her pet parrot had daily recited verses from Bhagwat Gita that had completely purified her heart.

Thereafter the Parrot told them about the recitation of the verses of Bhagwat Gita. Parrot told them that in the previous life the parrot had been a proud and envious, yet very learned Brahmin who had insulted other learned persons. Due to his Insult of Learned people, he had now, therefore, received the body of a parrot. But as a parrot he had often heard certain sages reciting the First chapter of the Bhagavat-Gita, and he had also begun reciting it. So he had become purified due to that. After being sold to the prostitute, the parrot continued his recitations of Bhagavat-Gita and thus earned the prostitute pious credits.

Susharma eventually became completely pure, and within a short time he attained to the poise Planet of Lord, Vaikuntha,the supreme destination.”

Bhagwat Gita: Chapter One (1) is entitled "The Yoga of Dejection of Arjuna." This Chapter One has a total of 46 verses.

Verses 1 to 11 are about the Description of the Principal warriors on both sides (Kauravas & Pandavas) with their fighting qualities.

Verses 12 to 19 are about the Blowing of conches by the warriors on both the sides.

Verses 20 to 27 are about; when the Arjuna observes the warriors drawn up for the battle.

Verses 28 to 46 are about; when the Arjuna is overwhelmed by the Infatuation & when Arjuna gives expression to his faint-heartedness, tenderness & grief.

To read complete chapter one (1) Verse by Verse in Original Sanskrit Language Text & its English Translation......Click here to read...........Bhagwat Gita: Chapter One (Chapter-1)