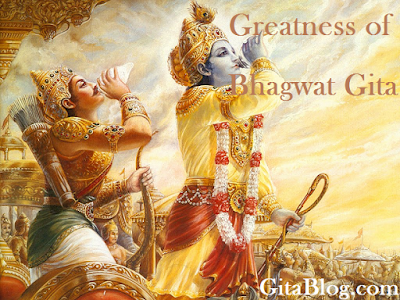 “In the olden times there was an intelligent Brahmin with the name of Devasharma who made demigods happy with his devotion to them. Though he has everything but he always remained unhappy as he wanted to know about the knowledge of the Supreme God. To have this Absolute knowledge he discussed it with many learned men, saints & did a great service to them. During this time he met a great Godly man who used to meditate daily on God & he had full knowledge of the Supreme God. That Godly man asked Devasharma to go to the Forest area of Asau-pura & meet the Goat-heard named Mitravan and ask from him about this knowledge of God realization.

After paying his respect to the Godly man, Devasharma went to the woods to find Mitravan. When Devasharma reached at Asau-pura, he found Mitravan in a beautiful forest, beside a small river, sealed atop some rocks. Mitravan looked very calm, peaceful, and his goats moved here and there fearlessly. Some goats even sat next to tigers over there and other ferocious animals. At this beautiful place, Devasharma also became calm, peaceful. After paying obeisance's to the Mitravan, he inquired from him about devotion to Lord Krishna.

On request of Devasharma, the learned man Mitravan, narrated him the following story: “My dear Devasharma, once when I was in this forest herding goats by the bank of this river, a tiger attacked all of us. On seeing the ferocious tiger, goats & myself ran away. Then from a distance I saw one goat being chased by the tiger. But suddenly a strange wonderful thing happened: the tiger lost its anger and no longer desired to eat the goat.” Mitravan described that both the tiger and goat were confused by this sudden peacefulness and so they approached him to ask what had happened. Mitravan in turn, inquired from a monkey who told him the story of Sukama, a learned sage.

Sukama had once pleased another sage by feeding him sumptuously and speaking pleasant words. The pleased sage gave Sukama the second chapter of the Bhagavat-Gita written on stone. The sage left after giving Sukama an instruction to recite this second chapter of the Bhagavat-Gita daily. Because Sukama followed this instruction, he quickly attained complete knowledge of Absolute, knowledge of Lord Krishna. And because of his devoted austerities, performed at the very place where Mitravan and the monkey were standing, anyone who came there, no longer felt the pangs of hunger and thirst and at once attained complete peace.

Afterwards, Mitravan told Devasharma that he and the tiger and goat had later found the stone in a temple and had begun reciting the Second chapter of the Bhagavat-Gita daily. In this way they had quickly attained to peace & devotion to Lord Krishna. Devasharma decided to carefully follow Mitravan’s example, and thereafter, in the village where Devasharma lived, visitors would recite with him the second chapter of the Bhagavat-Gita. In this way Devasharma attained to the divine mercy of Lord and the lotus feet of Lord Krishna.”

Chapter Two of Bhagwat Gita is entitled "Sankhyayoga or the Yoga of Knowledge."

Bhagwat Gita: Chapter Two (2) is entitled "Sankhyayoga or the Yoga of Knowledge." This Chapter has a total of 72 verses.

Verses 1 to 10 are about the discussion of Lord Krishna & Arjuna relating to Arjuna's faint-heartedness.

Verses 11 to 30 are about the "Sankhyayoga" & this Yoga of Knowledge is described herein.

Verses 31 to 38 are about the Kshtriya's duty to engage himself in fight.

Verses 54 to 72 are about the marks of the man of stable mind and glories of such a man are described herein.

Below are some verses from Bhagwat Gita, Chapter Two:

"Sri Krishna said: O Arjuna, All these bodies pertaining to the indestructible, immeasurable and eternal living entity / soul are spoken of as perishable; therefore, fight, Arjuna."

"Sri Krishna said: O Arjuna, They are both ignorant, he who knows the soul to be capable of killing and he who takes it as killed; for verily the soul neither kills, nor is killed."

"Sri Krishna said: O Arjuna, how can a human being who knows that the soul is indestructible, eternal, unborn and immutable kill anyone or cause anyone to kill?"

"Sri Krishna said: O Arjuna, As a human being puts on new garments, giving up old ones, the soul similarly accepts new material bodies, giving up the old and useless ones."

"Sri Krishna said: O Arjuna, The soul can never be cut to pieces by any weapon, nor burned by fire, nor moistened by water, nor withered by the wind."

"Sri Krishna said: O Arjuna, This individual soul is unbreakable and insoluble, and can be neither burned nor dried. He is everlasting, present everywhere, unchangeable, immovable and eternally the same."

"Sri Krishna said: O Arjuna, It is said that the soul is invisible, inconceivable and immutable. Knowing this, you should not grieve for the body."

"Sri Krishna said: O Arjuna, If, however, you think that the soul [or the symptoms of life] is always born and dies forever, you still have no reason to lament, O mighty-armed."

"Sri Krishna said: O Arjuna,One who has taken his birth is sure to die, and after death one is sure to take birth again. Therefore, in the unavoidable discharge of your duty, you should not lament."

"Sri Krishna said: O Arjuna, he who dwells in the body can never be slain. Therefore you need not grieve for any living being."