Your Mind in Anger is like a ‘Raging Bull’ 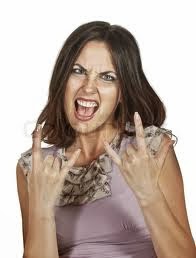 Once a bull escaped from a nearby cattle herd & entered the city. On seeing the mob inside the city it became violent & rushed helter-skelter in between the mob. In this process bull ran down many people & injured them badly. It was tried by many people to capture the bull but all in vain & it ran here & there damaging the property. Then one strong bullfighter was called & the bull was captured. A strong thick rope was put around it's neck & it was tied to a post. Hereafter all the pell-mell ended.

The above story is depicted here to understand the state of our mind in philosophy. Human mind is very fickle & it runs from one object to the other. In this process, mind too sometimes gets violent & anger is expressed in our nature. In the state of anger we too hurt many by speaking angry words. When anger gets out of control and turns destructive, it can lead to problems for oneself, as well as, for others. In the state of anger we are at the mercy of an unpredictable and powerful emotion which if not controlled does harm only. If anger is not controlled it can lead to physiological, as well as, psychological problems for you.

Now how can we control this anger? Basically, to control anger is to first control & calm your mind. If your mind remains in a state of calm then no negative emotions can arouse in it. To be peaceful at mind, the easiest way is that we let our mind delve inside our own inner nature rather than hankering after outside worldly objects. If mind continuously runs after worldly things then it gets disturbed when the thing of desire is not attained. When the mind gets disturbed in this way then anger arouses in the mind & it leads to negative consequences only. When you close your eyes in meditation, you start delving inside your inner nature. What is your inner nature? It's nothing but your soul inside where you delve in times of meditation & attain peace. In soul there is peace only. Now your soul is nothing but part & parcel of Universal Soul only. Universal Soul is nothing but God only who is ultimate peace.

In Bhagwat Gita philosophy it is said that the easiest way to control your mind is to tie it to the feet of God. When mind always remains in remembrance of God then it stops hankering after external worldly objects. When external hankering of mind stops then peace itself comes to mind immediately. So our mind is also like a raging bull which if not controlled does damage to oneself, as well as, to others by expressing emotions like anger, jealousy, fear etc. Just like the raging bull was tied to a post with rope & everything became calm, so let your mind be tied to the feet of God so that all your negative emotions arousing in mind come to a peaceful & calm state.

Here below is what Bhagwat Gita teaches about "Mind Control". Mind is that makes the personality of a person. Angry, jealous, fearful, de-motivated mind makes a person depressed one while a peaceful, calm, motivated mind makes a person cheerful. Mind is very powerful one & to control it is just like keeping in control a raging bull. It just wanders like wind here & there & it takes enough of self discipline & practice of meditation to control it. As per "Arjuna" to "Lord Sri Krishna" in Bhagwat Gita Chapter Six verse 34:

"Lord Sri Krishna said: O mighty-armed Arjuna, it is undoubtedly that mind is very difficult to curb & is restless, but it is possible by suitable practices of meditation and by detachment to control it."