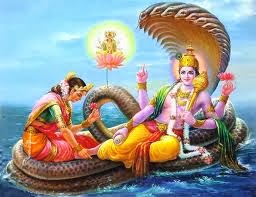 On hearing this, Pig asked the "Goddess Lakshmi"; Shall there be "Mud (filth) in the heaven as he feels happy in that condition only???
"Goddess Lakshmi" was very much perplexed at listening this & stopped thinking of uplifting the condition of that Pig.

Similarly, once there was a man who always used to live in an area full of filth & dirty smell. He was so used to living in that area that he never felt any unease living in such surroundings. One day that man went through an area where there were many shops of Perfume (Scent, Itr, sweet smelling liquid, fragrance giving liquid). On smelling such sweet fragrances coming from that area, that man actually fainted.
Same is the case with many of the people, who have a similar condition within their mind. Such people too have filth filled inside their mind. They lack the internal purity & are possessed of hypocrisy, conceit, arrogance, jealousy & are very egoistic. Their mind is given to insatiable passion, lust & anger. They are given to the enjoyment of sensuous pleasures only. Such people strive to obtain by unlawful means hoards of money for the enjoyment of sensuous pleasures. Such people are self-important, unbending, filled with the intoxication of wealth & honor. These people are given over to egoism, violence, insolence, passion & anger.

"Sri Krishna said: O Arjuna, Taking shelter of insatiable lust and absorbed in the conceit of pride and false prestige, the demoniac, thus disillusioned , are always sworn to unclean work, attracted by the impermanent."

Such malicious persons hate the God that dwells in the bodies of others, as well, as in their own body. Above mentioned qualities of hypocrisy, conceit, arrogance, jealousy, passion, lust, anger etc. are the qualities of a "Mental Filthy" person only. If you ask or teach them to change their mental position then they are as reluctant as a "Filthy Pig" to change their condition.

"Sri Krishna said: O Arjuna, Bewildered by false ego, strength, pride, lust and anger, the bad natured people become envious of the Supreme Lord, who is situated in their own bodies and in the bodies of others, and blaspheme against the real religion."