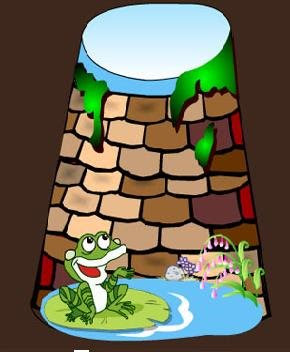 Once a frog used to live in a well. He was born in the well & his whole life was spent only in the well. He had never seen the world outside the well, as the well was so deep that he was never able to come out of that well. Boundary of that well was his world. Once another frog from the sea accidentally fell into that well. On seeing a stranger in his well, frog of the well asked the frog of the sea:

Same is applicable with human mind also. Now you just tell me, how big is this space in which so many stars & universes are there. Now if your mind thinks of a certain figure of distance & number of stars, then your mind is limiting itself to a certain boundary. But this vast existence is beyond the boundaries because beyond the boundary, again starts another sky which is limitless & is having so many stars & universes. So in the flight of the mind skies upon skies are there in this vast space.

There are more & more Worlds beyond these Stars.

In fact this whole vast creation is limitless & infinite. It is beyond the conception & boundaries of human mind. As per the Bhagwat Gita, this whole universe, in which Supersoul or Brahmn resides is Limitless (Anant). This whole vastness of this universe or space cannot be comprehended by the limited human mind. Human mind always thinks within the boundaries. This limited thinking of human mind limits itself to think about the true vastness of one's own true self, which is unlimited in potential. One can always attain much more in life than what his/her limited mind thinks of attaining. So do not be content easily in life & always strive to achieve more & more in life. You are capable of doing & achieving much more in life than what your limited mind can imagine. Those who remain content easily in life always remain small in life; small are their joys, small are their happiness, small is their being. If you are one among such content people then this smallness is your own imposition upon your unlimited possibilities, upon your freedom, upon your unlimited potential.
Posted by Sancho at 12:51 PM