Is there life on other Planets???... Yes, You are a Cosmic Traveler 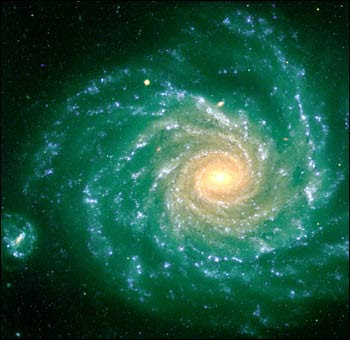 Is there life on other Planets??? Do we travel or can travel from one Planet / Star to another? This question is always there in modern day scientists mind. As the distances from one planet to another are so high that even if we are able to travel very very fast towards these planets, it shall take many many years to reach the nearest planet. But we do see so many stars, planets, galaxies through telescopes & now a days, through Hubble Telescope too so many Galaxies & stars are so vividly seen that our earth is not even a speck of dust in this vast Universe. But due to distances of Space & Time, we are unable to actually see into these other celestial things/bodies from closer & are unable to find the facts whether there is life there on these celestial bodies or not?

So we shall have to change our thinking, rather Mindset about all such matters. Till date our Scientific World is able to think only about the Material Things & Material Bodies & our scientists are able to think & do research about these Material things only. But the vastness of this world limits their research as said above due to the limitations posed by Einstein's theory of Relativity as with this material body of theirs they cannot go & explore the outer worlds out there. Now our scientists, astronomers need to change their thinking & Mindset. They need to think beyond Material things & need to think about "Immaterial things" , "Immaterial Bodies" & "Immaterial worlds".

Now what is "Immaterial"? "Immaterial" is that thing which exists but is not in the Material Form. "Light" is a kind of "Immaterial" thing. Light can be felt, it has it's existence but still it is not material. So the Things/Bodies/Worlds made of Light or "Immaterial" substance needs to be the new research area of our scientists if they need to know more about this big, huge universe. Now, as with the material mindset we cannot know about this universe & other planets , we need to think in terms of subtle things & spiritual things, with a spiritual mindset. With this Spiritual thinking only where we go beyond this material thinking, we are able to know more about this universe. Here a thing to note is that subtle & spiritual things & thinking about it is a matter of FAITH & not reason, as those things which exists but are unable to be seen by eyes or perceived with our other senses, cannot come under the scope of physical microscope or can be reasoned. But if we do have FAITH & do subtle practices to perceive it, then we can know about these & experience these also.

In this sense, "Bhagwat Gita" is a great book which gives all these answers to these questions. Now as the science & it's laws have limitations , so we shall need to have " FAITH" in all these scriptures & shall need to find the truths of Life & it's Subtle answers from these great books. As per "Bhagwat Gita" , God has created this whole creation with its so many planets/Stars/Solar Systems/Galaxies where people live in Material, as well as, in "Immaterial Bodies" & a person goes to these places at different points of Time & Space as per their Karmic Laws.

Below are few verses of "Bhagwat Gita" which points out of a soul travelling to different planets as per Karmic Law.

Here is one "Verse - 14, Chapter Fourteen of Bhagwat Gita"

"When one dies after doing Great & Good Karmas & establishsed in the mode of goodness, he attains to the pure higher planets of the great sages."

Here is another one "Verse - 15, Chapter Fourteen of Bhagwat Gita"

Here is another one "Verse - 18, Chapter Fourteen of Bhagwat Gita"

So the above said verses clearly establish that there are many many worlds in this universe where there is life & these planets / stars / worlds are inhabited by people of different good & bad qualities. Human soul after doing Good & Bad Karma's on this earth travels to these worlds after death & live over there as per Karmic laws.

There are many expert Yogis who by the power of their Yoga can go out of their present body at will & can travel anywhere in this universe by the power of their Yoga. But such Great Yogis are rare. In India there had been many mystics who had the power to rise above the laws of nature & are beyond the powers of Karma's. They had the power to move out of their body & in the cosmos at their free will. Jesus Christ too had similar powers due to which he was able to resurrect his body after death & was able to appear before his disciples after death. He too had the power to move freely on Earth & in Cosmos even after his death. Jesus had realised the all pervading God or all pervading consciousness & was one that consciousness. Due to his oneness with God, Jesus had the power to move around the many mansions of God i.e. move around different planets/ stars/ cosmos in the universe.

Now below is how a normal human soul (not a realized Yogi's Soul) travels to these worlds after death as per the karmic laws.

As per the "Bhagwat Gita", " in human body there is an entity called "Mann" which is also an "Immaterial" substance . This "Mann" is also called a spark of the universally present consciousness. It is the "Consciousness" or " Mann" through which we are able to perceive this world, i.e. all the enjoyments of senses are perceived through this " Mann" only in our body. Human intellect & memory are also a part of it & all the memories of this birth & previous births are also stored in this "Mann" only.

At the death of a person this "Consciousness" or " Mann" takes aways all the human senses, its past, present sensory experiences & all the past, present memories with it. It is so subtle that due to its "Immaterial" nature it can travel at the speed of Light & can travel from one planet to another. So due to all the Karmic law as destined by God, it goes from one body to another in the different worlds. So as a person's "Mann" moves from one body to another & one world to another world in " Time & Space", so that's why, It is also called "A Cosmic Traveler"
Below are some more verses of "Bhagwat Gita", which clearly tells that there are so many Material Worlds in which a Soul ("Mann" which is a spark of the all pervading Cosmic Consciousness) travels from one place to another after taking repeated births. These are those people who have not yet known the God, hence they take repeated births.

But then there are those great souls who have known God & becomes eligible to better worlds which are not perishable. These worlds & these human beings are not annihilated & live an eternal life over there. Below are two verses teaching the same thing.

"From the highest planet of Brahm Loka in the material world down to the lowest world, all are places of misery wherein a person comes in repeated birth and death from time to .time. But one who attains to to Me (God), O son of Kunti, never takes birth again."

So Let us have Faith in God & Scriptures as with a spiritual bent of mind only you can unravel the mysteries of world & your life.