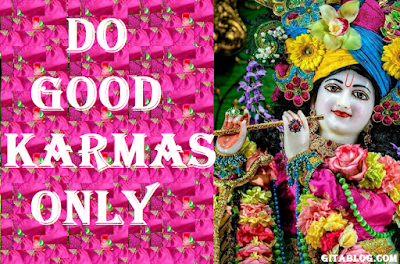 Lets first take the case of Bhishma Pitamah. He had to Suffer on a Bed of Arrows? To the question as to why Bhishma Pitamah was suffering this punishment even when he had not committed any sin during past 72 birth lives (Great Bhishma could peep into his past lives through Samadhi), Lord Krishna replied him that he committed a folly in past 73rd life birth when he inflicted injuries to insects by piercing thorns / needles into their bodies. Those thorns have now appeared as bed of arrows for you. Your sinful Karma remained dormant as you were a pious person throughout these lives but since you have now become a party to Adharma of Duryodhana, the sanchit evil Karma’s of 73rd life has ripened now.

Next lets take the case of Ashwathama who was given a curse by Lord Krishna at the end of Mahabharata war.

At the end of Mahabharata war, Ashwathama entered into the tent of the Pandavas and mistakenly killed all the 5 sleeping sons of Pandavas and set the camp on fire. Later on Ashwathama through deadly weapon called Brahmastra also killed the child in the womb of the pregnant ‘Uttara’ (wife of martyr Abhimanyu - the great archer and son of Arjuna), however Lord Krishna later revived the child through His Grace. So Ashwathama tried to kill everyone in the Pandava’s family. On this Lord Krishna became very angry with Ashwathama & Cursed him badly. Lord Krishna Cursed him like this:

Similarly all those people who do bad Karmas are Punished surely by God at one time or the another as showed in above examples. Otherwise also God has created 8.4 Million different species in which a person goes after death. Say if a person has done very Bad Karmas, then he may become an animal or bird like a dog, snake, cat, crocodile, cow, bull, monkey, pig, horse, donkey, lion, crow, falcon  etc. or a person can become insect etc. also & may have to suffer for innumerable years in such lives for his bad Karmas before he can get redeemed for his bad Karmas.

Jai Shri Krishna
Posted by Sancho at 9:08 AM