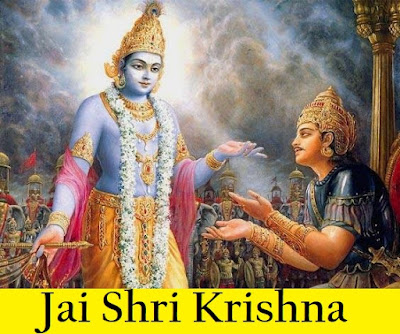 Here below is explained the Greatness of Chapter Thirteen of Bhagwat Gita. Read the story below to see, how all the sinful reactions are destroyed by just reading the Chapter 13 of the Bhagwat Gita.

“Lord Siva said, “Oh Parvati, please hear the unlimited glories of the Thirteenth Chapter of the Srimad Bhagwat Gita, by hearing which, you will become very happy.

In the olden times in South, there was a very large river of the name Tungabhadra, on the banks of which; there is a very beautiful town of the name Hariharpur. There, the deity of Lord Siva, known by the name Harihar, is worshipped. One, who has His darshan, attains auspicious things.

In Hariharpur lived one brahmin by the name of Hari-Diksit, who was very learned, and lived a simple, austere life. His wife was called Durachara, by the people. The reason for this was due to her low-class activities. She would always speak to her husband in abusive language, and she had never slept with him. She was always rude to her husband’s friends, and she would keep company with other men, to satisfy her lusty desires. She was also addicted to taking various kinds of intoxicants. Seeing that the town was becoming more and more populated, she constructed a small structure in the forest where she could meet her lovers.

One night, feeling very lusty, and not having been able to find any lover to satisfy her lust, she went out into the forest to her meeting place, to see if any of her lovers were there. Not finding anyone at that place, and burning up with lust, she started to wander in the forest in the hope of finding someone to satisfy her lusty desires. After having wandered for some time, and finding that her body, senses and mind were paining so much, due to not being able to satisfy their lust, she became bewildered and sat down and started to cry.

Hearing the sound of her crying, one hungry tiger, who was sleeping, woke up and reached that place very quickly. Hearing the tiger coming, the lusty woman got up and thinking to herself that surely someone is coming who would satisfy her needs, she all of a sudden saw a tiger arrive in in front of her. He was about to rip her apart with his sharp claws.
At that time, the lusty woman addressed the tiger, “Oh tiger, why have you come here to kill me? First you must tell me this and then you can kill me.” That king of animals refrained from killing Durachara, and laughed. Then he related the following story.

“In the South there is a river of the name Malapaha. On the bank of which is the town of Muniparna. At that place, there is a famous deity of Lord Siva, known as Panchalinga. In that town I had taken birth in a brahmin family. Although I had taken such a high birth, I was still very greedy, and had no control over my senses. I used to sit on the banks of the river and perform sacrifices for those persons, who were not qualified to partake in such performances. I would also eat from the homes of materialistic persons. I would also collect more funds than necessary in the name of performing sacrifices and worship for the deity, and use the same for my own sense gratification. I would also criticize those Brahmins, who were strictly following the regulative principles, and I would never give charity to anyone. Slowly I became old, my hair turned white, my teeth fell out, my eyes became weak, but even still, I did not lose my lust to collect and hoard more funds. One day, by mistake, I went to the house of some Brahmins, who were very cruel and expert at cheating, to beg some food, when they set the dogs on me. One of those dogs bit my leg and I fell over and very quickly died. After that, I attained this tiger’s body, and I am living in this dangerous forest.

Fortunately, I am able to remember my last birth and in this birth I do not attack any devotee, sannyasi or chaste lady. Only those sinful. persons and unchaste woman I take as my food. As you are the most unchaste, and sinful woman, you will definitely become my lunch.”

.After the tiger had finished his narration, he devoured that sinful woman. Thereafter, the Yamadutas threw her into the hell known as Duyada. And she had to stay in that filthy place for a very long time. After that, she was thrown into the hell known as Raurava, where she stayed for one hundred manvataras, after which she again took birth on earth as a female chandala. Again she lived in the same sinful way as she had previously done. Due to her sinful activities, she got leprosy and also tuberculosis. By chance and good fortune, she once went to the holy place of Hariharpur and close to the temple of Jambakadevi (Parvati). She saw the great saint Vasudeva who was always reciting the Thirteenth Chapter of Srimad Bhagwat Gita. From his mouth she heard that recitation, and becoming attracted, she heard it again and again and by that hearing, she was able to give up that body of a chandala and becoming completely free from the reactions of her past sinful activities. She attained a four-armed form similar to Lord Vishnu, and she was taken to Vaikuntha.”

So that is the greatness of Chapter Thirteen of Bhagwat Gita.”

Chapter Thirteen of Bhagwat Gita is entitled "The Yoga of Discrimination between the Field and the Knower of the Field."

Bhagwat Gita: Chapter Thirteen (13) is entitled "The Yoga of Discrimination between the Field and the Knower of the Field." This Chapter has a total of 35 verses.

Verses 1 to 18 describes the subject of the "Field" and the "Knower of the Field" with Knowledge.

Verses 19 to 35 describes the subject of "Prakriti" and "Purusha" (Matter and Spirit) together with Knowledge.

Below are some verses from Chapter Thirteen of Bhagwat Gita:

"Sri Krishna said: O Arjuna, That knowledge of the field of activities and of the knower of activities is described by various sages in various Vedic writings. It is especially presented in Vedanta-sutra with all reasoning as to cause and effect."

"Sri Krishna said: O Arjuna, Everywhere are His hands and legs, His eyes, heads and faces, and He has ears everywhere. In this way the Super soul exists, pervading everything."

"Sri Krishna said: O Arjuna,The Super soul is the original source of all senses, yet He is without senses. He is unattached, although He is the maintainer of all living beings. He transcends the modes of nature, and at the same time He is the master of all the modes of material nature."

"Sri Krishna said: O Arjuna, The Supreme Truth exists outside and inside of all living beings, the moving and the nonmoving. Because He is subtle, He is beyond the power of the material senses to see or to know. Although far, far away, He is also near to all."

"Sri Krishna said: O Arjuna, Although the Supersoul appears to be divided among all beings, He is never divided. He is situated as one. Although He is the maintainer of every living entity, it is to be understood that He devours and develops all."

"Sri Krishna said: O Arjuna, He is the source of light in all luminous objects. He is beyond the darkness of matter and is un-manifested. He is knowledge, He is the object of knowledge, and He is the goal of knowledge. He is situated in everyone’s heart."

"Sri Krishna said: O Arjuna, Thus the field of activities [the body], knowledge and the knowable have been summarily described by Me. Only My devotees can understand this thoroughly and thus attain to My nature."

"Sri Krishna said: O Arjuna, Material nature and the living entities should be understood to be beginning less. Their transformations and the modes of matter are products of material nature."

"Sri Krishna said: O Arjuna, Nature is said to be the cause of all material causes and effects, whereas the living entity is the cause of the various sufferings and enjoyments in this world."

"Sri Krishna said: O Arjuna, The living entity in material nature thus follows the ways of life, enjoying the three modes of nature. This is due to his association with that material nature. Thus he meets with good and evil among various species."

"Sri Krishna said: O Arjuna, Yet in this body there is another, a transcendental enjoyer, who is the Lord, the supreme proprietor, who exists as the overseer and maintainer, and who is known as the Supersoul."

"Sri Krishna said: O Arjuna, Those with the vision of eternity can see that the imperishable soul is transcendental, eternal, and beyond the modes of nature. Despite contact with the material body, the soul neither does anything nor is entangled."

"Sri Krishna said: O Arjuna, as the sun alone illuminates all this universe, so does the living entity, one within the body, illuminate the entire body by consciousness."

"Sri Krishna said: O Arjuna, Those who see with eyes of knowledge the difference between the body and the knower of the body, and can also understand the process of liberation from bondage in material nature, attain to the supreme goal."