Do Not Worry, Have Faith in Lord Krishna 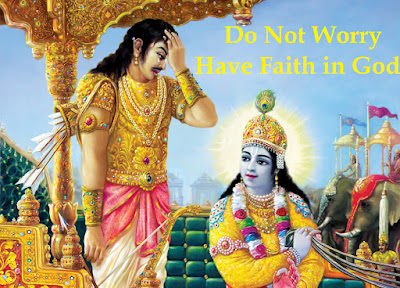 "Once there was a rich man who was having all the amenities of life but was not happy because of this worrying nature.

He went to an astrologer and showed his horoscope.

The astrologer said, “Everything is alright in your horoscope for now. Your anxiety of mind is without any reason & it is simply troubling you. Astrologer advised him that he should learn Bhagavat Gita from a Spiritual Teacher and implement it in his life. That will solve all of his anxieties. There is no other solution”.

The rich man went to a Spiritual Teacher and the Teacher was very happy to teach him Bhagavat Gita.

He said “OK. We’ll start with the first chapter and complete the whole book of 18 chapters in 3 months”.

The man said, “No Sir. I’m very busy with many things. So teach me the most important part of Bhagavat Gita”.

The teacher said, “OK. Just learn 18th chapter. It is the summary of the Bhagavat Gita and it will take 2 weeks”.

The man said, “Even 2 weeks is difficult. Teach me something more simple”.

The teacher said, “OK. There is one Shaloka (Verse) in the 18th chapter starting with “Sarva dharman parityajya”. Just learn that one Verse and it will give you the essence of the Bhagavat Gita”.

The man said “One Shaloka (Verse) is also difficult for me to learn. Tell me something more simple.”

The Spiritual Teacher said, “There is one important word in that Shaloka (Verse) ‘Ma shuchah’, which means, “Do not worry”. Just understand this and Gita is understood.”

The man said “That’s alright. But I’m already in anxiety and tell me how to remove it. Just telling “do not worry” will not help me. Please tell me what I should do to get rid of anxiety”.

The teacher said, “That is what the Bhagavat Gita is all about. If you want to know how to be free of worries then you should start from the chapter 1 of Bhagavat Gita and go through patiently and understand all the chapters. There is no shortcut to this process as Bhagavad Gita is itself a short cut given by the Lord Krishna to learn spirituality. It is the essence of all Vedas and the Lord has mercifully given that so that one need not go through the Upanishads and Vedic mantras to understand the truth.” The man came to his senses and started studying Bhagavat Gita from the beginning seriously under that Spiritual Teacher."

Moral of the story:

"Sri Bhagavan said: Arjuna, You speak the learned words but you are mourning for what is not worthy of grief & not be mourned . Those who are wise mourn neither for the living nor for the dead."

Here Lord Krishna states Arjuna not to worry for something which is not worthy of worrying.

In material existence we take so many bodies and without fail in all these bodies, we think we’re the controllers and the anxiety follows without fail.

And in the Bhagwat Gita there is only one point stressed by Lord Krishna from the beginning to end.

He starts with ‘Don’t worry’ in Chapter Two verse 11 and many times in the second chapter he repeats “na tvam shocitum arhasi” (you have no reason to worry).

In the Bhagwat Gita Chapter 16 verse 5 Lord Krishna again tells Arjuna ‘Ma shuchah’ (do not worry) and in the final instruction he concludes again with the same words, “I will deliver you from all sins. Do not worry (Ma shuchah)”.We can understand from this that the summary instruction of the Bhagwat Gita is one should throw out anxiety. The whole world is in the control of the Lord.

We worry for lack of riches or comforts and become anxious when others possess it. In this way, worrying has become a part of our nature. Actually this anxiety is due to lack of faith and surrender to Lord Krishna. And there are no shortcuts to be free from anxiety.

"Sri Krishna said: O Arjuna, he who dwells in the body can never be slain. Therefore you need not grieve for any living being."

The only way to stop worrying is constant chanting of the Lord’s names and scrutinizing study of scriptures like Bhagwat Gita and Bhagavatam in an attitude of surrender to learn how GOD controls everything.

"Sri Krishna said: Arjuna, It is said that the soul is invisible, inconceivable and immutable. Knowing this, you should not grieve for the body."

"Sri Krishna said: Arjuna, If, however, you think that the soul [or the symptoms of life] is always born and dies forever, you still have no reason to lament, O mighty-armed."

"Sri Krishna said: Arjuna, One who has taken this birth is sure to die, and after death one is sure to take birth again. Therefore, in the unavoidable discharge of your duty, you should not lament."

Jai Shri Krishna
Posted by Sancho at 11:21 AM