Our Interpretation of God 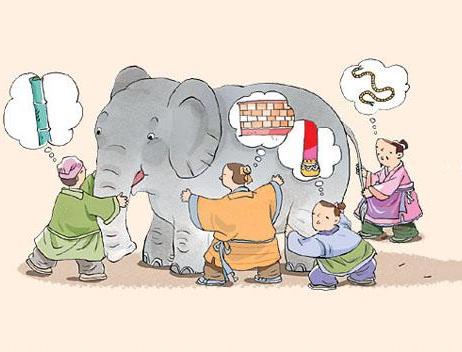 Each in his blindness is describing the same thing: an elephant. Yet each describes the same thing in a radically different way. We all are like those blind men only in our knowledge of God who describe the God as per our own understanding. Now say a fifth man (who could see) comes to the scene and he were to describe the elephant as an elephant, then he would tell clearly about the elephant as it is."

Same is the case that only a true master who has seen God actually can tell how God looks like. Let's seek such a True master, Great soul or Guru who shall tell us about the true nature of God & shall lead us to Him.

In Fact God is our faith that a Supernatural Power exists in this universe which has created us & all other universal forms. He is having supernatural powers, who is omniscient (knows everything), who is omnipresent (who is present everywhere), omnipotent (who is having all the powers & is all powerful), who is infinite, who is imperishable & indestructible. Faith of ours in such a big & great entity having all the powers is known as God.

In below quotes of "Bhagwat Gita" Lord Krishna is saying to Arjuna about the nature of God:

"Sri Krishna said: O Arjuna, The Supreme Truth exists outside and inside of all living beings, the moving and the nonmoving. Because He is subtle, He is beyond the power of the material senses to see or to know. Although far, far away, He is also near to all."

"Sri Krishna said: O Arjuna, Everywhere are His hands and legs, His eyes, heads and faces, and He has ears everywhere. In this way the Super soul exists, pervading everything."

"Sri Krishna said: O Arjuna, Although the Supersoul appears to be divided among all beings, He is never divided. He is situated as one. Although He is the maintainer of every living entity, it is to be understood that He devours and develops all."

"Sri Krishna said: O Arjuna, He is the source of light in all luminous objects. He is beyond the darkness of matter and is un-manifested. He is knowledge, He is the object of knowledge, and He is the goal of knowledge. He is situated in everyone’s heart."

As God is someone Superhuman, having Infinite size, knowledge & powers, then it is very difficult for us with limited knowledge & power to fully understand & describe the God in total. Let's seek a True master, Great soul or Guru who knows God fully, the one who can tell us about the true nature of God & can lead us to Him.