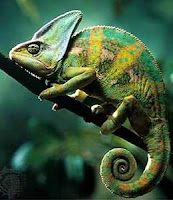 "Chameleon" is a creature in nature who can change his body color at will. It looks sometimes lavender in color, sometimes gray, sometimes green, yellow, cream, and sometimes it has really no color at all. Here is a story regarding that chameleon & why someone called God as chameleon.

"In ancient times, in a rustic village of India, there was a little park where people used to come in their spare time. Villagers used to spend their idle time over there & used to sit and chat with each other. The path to this park lay alongside the forest. On the edge of the path there was a large, well-known Kadamba tree. One day a city-dweller came to the village, passed by the tree, and saw a peculiar lizard climbing on the trunk of that tree. When he reached the park he told the others sitting there, "I just saw a Green lizard on that old Kadamba tree!"

"No, no, not Yellow," said another, "it is Cream colored." Then others chimed in: "We have seen it -- it is lavender (gray, etc.). Each person had a different picture of the lizard.

They decided to go to the tree to find the animal and settle the argument. Over there what they found was a Sadhu (Saint) from the forest, sitting in meditation under that Kadamba tree. The villagers questioned him about the animal. The saint answered, "I know all about that creature, who lives on this tree," he answered. "It is a Chameleon" (a creature who is able to change his body color at will). "It is sometimes lavender, sometimes gray, sometimes green, yellow, cream, and sometimes it has really no color at all."

Saint further said, "God, too is like that Chameleon, taking on different qualities and appearances, and then again He has none."

God is almighty & He is free to take any form. He Himself is Lord Vishnu, Lord Shiva & Lord Brahma. He Himself is Rama God too. He Himself is Allah, Jesus also. So as per one's faith He appears in that form & that's the reason that above said saint called God as chameleon.

In Bhagwat Gita Chapter Ten Lord Sri Krishna himself declares about His different forms & attributes which you can read here.

In fact God himself is the creator of all spiritual and material worlds. Everything emanates from Him.

"Sri Krishna said to Arjuna: I am the source of all spiritual and material worlds. Everything emanates from Me. The wise who perfectly know this engage in My devotional service and worship Me with all their hearts."