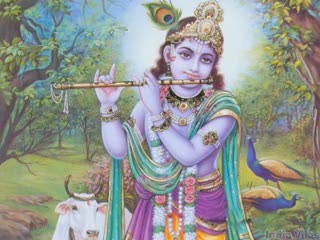 Similarly the great ancient scriptures speak of God as the Supreme Origin of the universe. But this is not enough. For, there are times when there is no creation at all but God still exists. Hence this is not a one line definition of God. So we cannot define the God vaguely that God is such & such. God is having infinite qualities which cannot be described in a few lines. That's the reason that some look on the God as amazing, some describe Him as amazing, and some hear of God as amazing, while others, even after hearing about Him, cannot understand Him at all.

Bhagwat Gita describes the God as unborn, eternal, ever-existing and primeval. God is never born nor dies at any time. God is manifest & un-manifest both i.e. He is there before the creation & also present during the creation. He is omniscient (knows everything), omnipresent (who is present everywhere), omnipotent (who is having all the powers & is all powerful), imperishable & indestructible. He is invisible, inconceivable and immutable. He is having supernatural powers. He is Truth Absolute, Knowledge Absolute and is Infinite. He is everlasting, present everywhere, unchangeable, immovable and eternally the same. So here are some of the qualities of God described.

Below are few verses of Bhagwat Gita which describe these qualities of God.

"Sri Krishna said: Understand that just as the mighty wind, blowing everywhere, rests always in the sky, so do all created beings rest in Me (Universal Soul)."

So above are described few qualities of God as told in Bhagwat Gita. Yet these are few only while God is having Infinite in nature & Infinite in qualities. So let's bow to & pray to such an Infinite God.