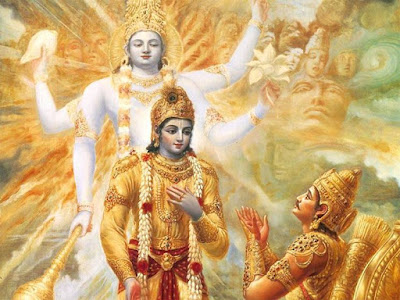 How many times in your life you have felt yourself depressed, de-motivated & dejected? How many times you have felt yourself defeated in life? If one feels like a defeated person in life then the battle of life is lost for that person. So we should not let our mind delve into the state of depression, de-motivation & dejection. We should never let our mind feel defeated as then there is no positive meaning of life. You can never succeed & be victorious in life if you feel yourself defeated at mind.

In the ancient Kurukshetra war, "Arjuna" the great disciple of "Lord Sri Krishna" also came into such a de-motivated & dejected state of mind. In that war "Arjuna" refused to do his duty of fighting a righteous battle as he got infatuated & started thinking of his enemies as his own near & dear ones. His mind became week & highly de-motivated. He told his master "Lord Sri Krishna" that he is going away from the war & do not want to fight on the battle field. Arjuna's mental health became weak & he got deeply depressed. To overcome his disciple Arjuna's depression & to motivate him to fight a righteous war, "Lord Sri Krishna" gave the great teachings of "Bhagwat Gita" to his disciple "Arjuna". After listening to all these great teachings, Arjuna's mental health became well & he became motivated & energetic to fight the war. Below are verses of Bhagwat Gita which shows how Arjuna became de-motivated & how he refused to do his duty of fighting a righteous war.

"Now Arjuna saw stationed there in the midst of the both armies, his fathers, grandfathers, teachers, maternal uncles, brothers, sons, grandsons, friends, and his fathers-in-law and well-wishers as well."

"Seeing all these relations present there, the son of Kunti, Arjuna was overwhelmed with extreme compassion and spoke these words in sadness."

"Arjuna said: Krishna, at the sight of these friends and relatives present before me in such a fighting spirit, my limbs give away, my body quivering and my mouth is parched."

"My complete body shakes & my hair stands on end. The bow Gandiva is slipping from my hand, and my skin is burning."

"My mind is reeling & I am now unable able to stand here any longer. I see the omens also inauspicious; only causes of misfortune, O Krishna, killer of the Keshi demon."

Below are verses of Bhagwat Gita in which Lord Krishna gave sermon to Arjuna to do his duty of fighting a just & righteous war & motivated his mind.