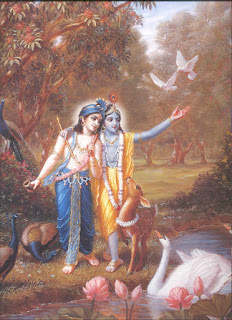 In this world God is all-powerful; almighty; unlimited in power & has all the ability to do anything but still we in our ego think & believe that we are the doer of everything & controller of all the events. But it is not so as God controls everything & manages all the events in the world. In His all powerful form God is called Omnipotent. Omnipotence is the attribute of God which describes His ability to do whatever He wills. No one or no force or happening can frustrate or prevent God from accomplishing his designs. God's Omnipotent power is sufficient to fulfill all His purposes and promises, including His promise of "Eternal life" for His devotees.

But still there are many people in this world who do not believe in all such powers of God & think themselves to be the master of everything. On such fools God laughs & feel pity for them. For such people Sri Ramakrishna Paramhansa says:

"God laughs on two occasions. Firstly God laughs when the physician says to the patient’s mother, ‘Don’t be afraid, mother; I shall certainly cure your son.’ God laughs, saying to Himself, ‘I am going to take away his life, and this man says that he will save him!’ The physician thinks he is the master, forgetting that God is the Master.

On second occasion God laughs again when the two brothers divide their land with a string, saying to each other, ‘This side of land is mine and that side is yours.’ God laughs and says to Himself, ‘The whole universe belongs to Me, but still they say they own this portion or that portion of land."

God is supreme & we should consider His supremacy in all the events. In this world even a leaf does not flutter without the God's will. Bhagwat Gita also talks about God to be Omnipotent. Below are some verses regarding that:


"Lord Sri Krishna said: O Arjuna, know that I am the original seed of all existences, the intelligence of the intelligent, and the prowess of all powerful men."


"Sri Krishna said: O Arjuna, Whoever knows Me as the All powerful Supreme God, without doubting, is the knower of everything. He therefore engages himself in full devotional service to Me."


"Arjuna said to Lord Krishna: O great one, greater even than Brahma, You are the original creator. Why then should they not offer their respectful obeisance's unto You? O limitless one, God of gods, refuge of the universe! You are the invincible source, the cause of all causes, transcendental to this material manifestation."

"Arjuna said to Lord Krishna: You are the original Personality of Godhead, the oldest, the ultimate sanctuary of this manifested cosmic world. You are the knower of everything, and You are all that is knowable. You are the supreme refuge, above the material modes. O limitless form! This whole cosmic manifestation is pervaded by You!"


"Arjuna said to Lord Krishna: You are the father of this complete cosmic manifestation, of the moving and the nonmoving. You are its worship-able chief, the supreme spiritual master. No one is equal to You, nor can anyone be one with You. How then could there be anyone greater than You within the three worlds, O Lord of immeasurable power?"


"Sri Krishna said to Arjuna: I am the source of all spiritual and material worlds. Everything emanates from Me. The wise who perfectly know this engage in My devotional service and worship Me with all their hearts."


"Sri Krishna said to Arjuna: Know that all opulent, beautiful and glorious creations spring from but a spark of My splendor."