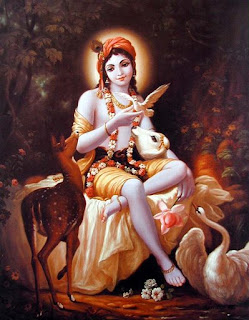 Devotion is the commitment to any person, cause or thing. A person devoted to something always remains in the thought of that thing, does all his actions toward that thing & always remains committed to that thing. Similarly Devotees of God also do live in the thought of God, do all their actions toward Him only & always remain committed to God. In this way they always live in a mood of ecstasy and self-surrender to God. Such devotees always channel their emotional energies toward God only. Stories of such devotees abound in Hindu scriptures. Here below is a story "God's Devoted Crow" about that only :

"In the "Treta Yuga" Lord Vishnu descended on earth as "Prince Rama". He was looked upon as God embodied on earth. Not only were human beings devoted to Him, but also were there many from the animal kingdom. One of those was a crow.

One day Lord Rama and his younger brother Lakshmana were walking beside the Lake Pampa. Lakshmana saw on the other side of the lake a large crow, behaving very strangely. Crow would run up to the water, look at it, bend its head, and then run back into the forest without drinking the water. Lakshmana saw the crow doing the same thing many times. So Lakshmana (who had great respect for his brother's opinions) asked Rama what he could make out of such a behavior of the crow. Why should a bird act like that?

Lord Rama gave one look at that crow and said, "Oh Lakshmana, I can tell you about it: this crow is very devoted to me -- so much so that he is chanting my name constantly upon his tongue. Just now he is thirsty, quite thirsty. But to drink the water he would have to interrupt his repeating of my name, and he just cannot bear to do that." So such was the devotion of that crow towards Lord Rama that it would always chant & repeat Lord Rama's name."

"Sri Krishna says to Arjuna: I envy no one, nor am I partial to anyone. I am equal to all. But whoever renders service unto Me in devotion is a friend, is in Me, and I am also a friend to him."


"Sri Krishna says to Arjuna: Fix your mind on Me, be devoted to me, worship Me & offer obeisance's to Me. In this way, linking to Me, you shall surely come to Me."

"Sri Krishna says to Arjuna: If any one offers Me with love and devotion a leaf, a flower, fruit or even water, I readily accept that offering of that devotee."

So let's have devotion towards the God. Let's remember God for some time in our daily life so that we can too generate some "Spiritual Emotion" toward the God. Once that is developed, we shall always find God near us & our life shall be filled with joy, love & ecstasy. So the Devotion to God is the supreme. It removes all the sins of a devotee & removes all the ignorance from one's life.