See The Hand Of God In Everything 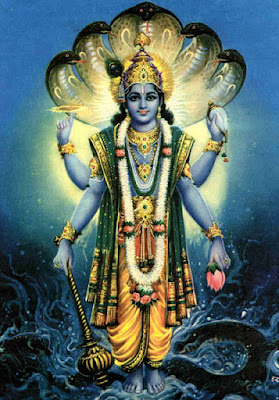 How much faith do you have in God? Some have this faith due to their family traditions, others due to their social traditions, while others have genuine search for God in their lives & they are the one's who have firm faith & quest for God. Only such people who have a great thirst for God are able to know the God truly. Through their such strong yearning for God, they start seeing God's presence in every person & object of the world. Such people also see the hand of God in everything & believe the God to be the cause of everything. Below is a beautiful ancient story of a cobbler from India who believed in this truth & saw the hand of God in everything:

In the ancient times there was once a cobbler who lived an ordinary, simple but honest life. He was a very poor man and had to work hard to support his family, but he was very much devoted to the worship of God - Lord Vishnu, the God of creation in Hinduism. He lived beside a huge Banyan tree. This Banyan tree's central trunk was huge & it was surrounded by smaller trunks which hung down from the branches to put out fresh roots. The tree was very old and was just like a small forest.

One day, as he worked in the shade of the Banyan tree, the great ancient "Saint Narada" came to visit him. Narada is famous among all Hindus as the personal messenger and friend of God-Vishnu. Saint Narada is able to see God, whenever he wants, but he spends most of his time travelling throughout the universe in all the different planets, visiting God's devotees and instructing them. The cobbler was very happy to receive the God's messenger, Narada. After welcoming him with due respect he ventured to ask if he had recently seen God-Vishnu.

"Yes," replied Saint Narada, "I have just been with God-Vishnu and He has sent me to see you."

The cobbler was amazed to hear that God-Vishnu had sent Narada to him. No one important ever came to see him - he was only a shoemaker. What possible interest could God-Vishnu have in him? After some time he asked Narada. "Why did God-Vishnu want you to see me?"

Saint Narada said: "God thought you might have some questions."

"Questions?" The cobbler was taken unawares. Saint Narada himself had come to answer his questions! Of course, he did have questions from time to time, but now, with this unique opportunity, his mind went blank! In confusion he could not think of anything.

Suddenly cobbler thought of one simple question. "What was God-Vishnu doing when you saw Him?"

"He was threading an elephant through the eye of a needle," Narada replied mysteriously.

"Threading an elephant through the eye of a needle?" the cobbler was surprised. He hadn't expected that God-Vishnu would be doing this. "Well, one thing's for sure," he said, "Only God-Vishnu could do that!"

"Surely you don't believe me," smiled Narada, amused at the cobbler's simplicity. He had given this answer merely to test the cobbler and didn't expect him to believe it. "I don't think even Vishnu could really do that - it's impossible."

"Why can't God-Vishnu do that?" responded the cobbler, a little taken aback at Narada's lack of faith. "Nothing's impossible for God-Vishnu. This world is full of His miracles. He makes the Sun rise each day. He makes the Wind blow. He makes the rivers run and the trees and flowers grow. He provides for the food for all the creatures in this world."

The cobbler said to Saint Narada, "Look at this," he went on as he bent to the ground and picked up a seed from beneath the Banyan tree, "Inside this seed is a Banyan tree as big as the one above us. It's just waiting to come out. If God-Vishnu can squeeze a whole Banyan tree into such a tiny seed, surely he can thread an elephant through the eye of a needle!"

Hearing the wisdom of the cobbler's words, Narada had to admit that what he said was true. He realized that this man was not a simple man he had thought of him but was very wise because he could see in everything, the hand of God.

So such is the faith of true saintly people like the cobbler in God that they cannot think of anything without Him. Such saints see God equally present in everyone, everything. Below verse of Bhagwat Gita says that only:

Sri Krishna said: The humble sages, by virtue of true knowledge, see with equal vision, the God present in a learned and gentle Brahmin, a cow, an elephant, a dog and a dog-eater (outcaste) even.

Below are few verses of Bhagwat Gita which tell us about the powers of God & how all this world is under His control:

"Sri Krishna said: There is nothing else besides Me, Like clusters of Yarn-Beads, Formed by knots on a thread, All this world is threaded on Me (universal soul)."