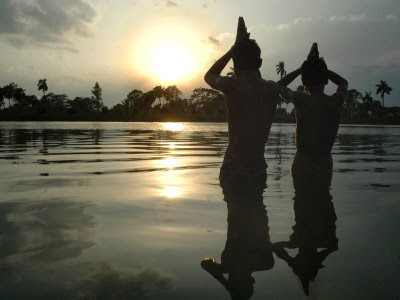 Just before the dawn, all around in the sky there is darkness but the end of night is just about to come. Then slowly Sun starts emerging & it dispels the darkness into light. Sun is also the source of energy to this world. Though Sun is 150 Million Kms from the earth but still it's rays & energy nurtures our earth just like a mother feeds her children. Sunlight is also the rich source of Vitamin-D which is essential for our body.

In Hinduism Sun is considered as a God. It is also called Surya (सूर्य, sūrya, lit "the Supreme Light"). He is worshiped in different names, chiefly as Surya Narayana, Bhaskara, Aditya, Ravi, Mitra, Bhanu etc. Many Hindus start their day with Sun worship. Even there is a temple dedicated to the Sun God at Puri in Orissa state of India. Sun God or Surya is considered as the only visible form of God that can be seen every day by us. Symbol of Sun or Surya is regarded as one of the auspicious signs for the Hindus & people place the sign of the Sun over main doors as they think it would bring them good luck.

Supreme God "Lord Krishna" Himself declares in Bhagwat-Gita that in one of it's forms He himself is there as "Sun God" which is sustaining this whole world.

"Sri Krishna said to Arjuna: Of the Adityas I am Vishnu, of Lights I am the Radiant Sun, of the Maruts I am Marici, and among the stars I am the moon."

Now here is, how the Sun is considered in philosophy to understand the Atman or Individual Soul. In reality the Sun, Sunshine and Sun's reflection are one but also the different. All-pervading sunshine is non-different from the sun. Both are heat and light, yet the Sun retains its form and identity as the source of everything.

Now just take the numerous "Pots filled with water" & put these below the bright noon Sun. Reflection of the Sun can be seen in all the pots & it appears that individual Sun is appearing in each pot. Not only that, water of each pot gets heated equally when Sun is reflected in the water pots. Now just as the Sun may be reflected in numerous pots of water, so the same one God is reflected in the hearts of all living beings as the Antaryami. Same Sun may shine in it's reflections on water kept in different pots but the different reflections are only apparent -'reflections' of the Sun, the real Sun is only one. Similarly there is one True Universal Self or God who is eternally pure, eternally perfect, unchangeable, unchanged; as it has never changed; and all these changes in the universe are but appearances in that one Universal Self.

This Sun appearing in different water pots analogy tells us many other things. Now just see that as long as the water exists in the pot, Sun's reflection is seen in the water pots but as long as pots are emptied of the water in it, Sun's reflection disappears. Similarly our body is like the earthen pot in which "Mind" is like the water in the pot & in this "Mind", Atman or Self's reflection gives life to this body. Now as long as the mind of a person exists in the body (pot), the image of the God or true Self (Sun) appears in this body & keeps itself alive. Now the very moment Body (pot) is emptied of "Mind", the death of a person happens & the true Soul which is the reflection of the "Universal Self" goes back to Him, just like the image of Sun in the 'Water Pot' goes back into the Sun when Pot is emptied of Water.
Posted by Sancho at 12:52 PM