God is in All Creation & in All Beings 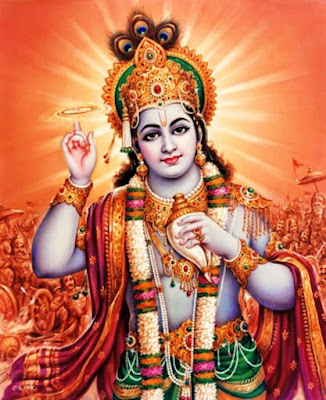 Here below is a beautiful story by Swami Vivekananda.

So he came again, and the spiritual master, in order to quiet the man, as he was so insisting, said: "I'll teach you about God".
The man asked: "Sir, what sort of being is God? What is his form? How does he look?"
The spiritual master said: "God is just like the big bull in your herd; that is just God; God has become that big bull".

The man believed him, and went back to his herd, and day and night he took that bull for God, and began to worship it. He brought the greenest grass for that bull, rested close to it, and gave it light, sat near it, and followed it.

Thus days and months and years passed. His whole soul was there. One day he heard a voice, as it were, coming out of the bull. The bull speaks: "My son, my son". "Why, the bull is speaking! No, the bull cannot speak". Again he went away, and sat near meditating in great misery of his heart; he did not know anything. Again he heard the voice coming out of the bull: "My child, my child". He went near but thought: "No, the bull cannot speak".

Then he went back again and sat despondent. Again the voice came and that time he found it out. It was from his own heart. He found that God was in him. Then he learned the wonderful truth of the Teacher of all Teachers: "I am with you always". And the poor cowherd learnt the whole mystery.

Then he goes back to the spiritual master, and when he is at some distance, the spiritual master sees him. The master has been the most learned man in the country, practising austerity for years, meditating, studying, and this cowherd, the ignorant one, never studied a book, never learnt his letters, but he comes, his whole body, as it were, transfigured, his face changed, the light of heaven shining round his face. The spiritual master got up. "What is this change? Where did you get this?"

"But I took it seriously, and I got everything. I prayed for God in the form of that bull, as God is everywhere & in all beings."

So that bull was the God-symbol and that man worshipped the bull as his God-symbol, as God, and he got everything out of it. So that intense love for God, that desire, brings out everything. God is in ourselves, and the external world. God is everywhere. When our desire for God becomes strong, the God within us awakes & shows us His way.

Below are some verses from Bhagwat Gita which illustrates the same:

"Sri Krishna said: Of the Adityas I am Vishnu, of lights I am the radiant sun, of the Maruts I am Marici, and among the stars I am the moon."

"Sri Krishna said: Of all creations I am the beginning and the end and also the middle, O Arjuna. Of all sciences I am the spiritual science of the self, and among logicians I am the conclusive truth."

Jai Shri Krishna
Posted by Sancho at 10:38 AM