When Lord gave Moksha to Gajendra 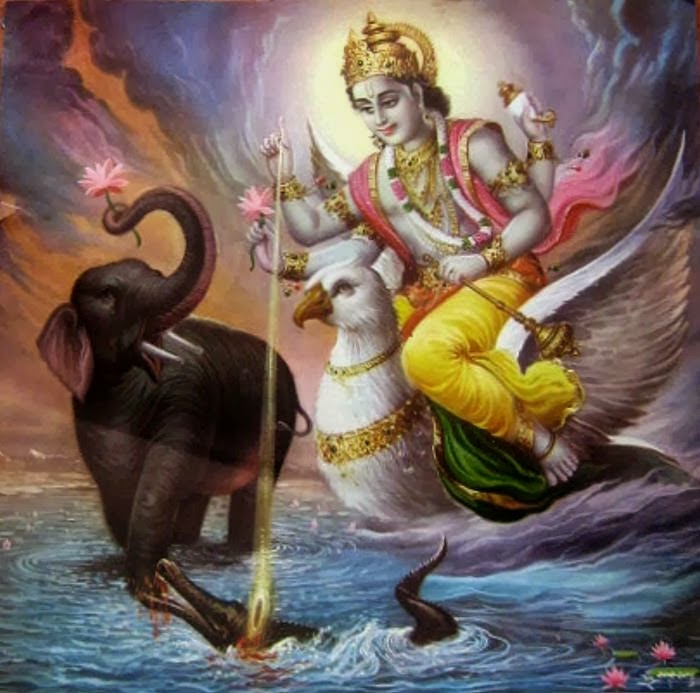 Lord not only protects his devotees but also gives, Moksha or Eternal Life in His abode to His Devotees. Now it does not matter whether devotee is a human being, a divine being, an animal or bird also. God protects every creature of this universe if that being asks for Lord’s help. Here below is a story from Srimad Bhagvatam in which an Elephant was saved by the Lord when a crocodile attaked him when he went to have water in the river.
“Once there was an elephant named Gajendra who used to live in a garden called Rtumata which was created by Varuna. This garden was situated in the beautiful mountains of Trikuta in ancient India. Gajendra ruled over all the other elephants in the herd. On a hot day, he proceeded with his herd to a lake to cool off in its fresh waters. Suddenly a crocodile living in the lake attacked Gajendra and caught him by the leg. Gajendra tried for a long time to escape from the crocodile's clutches. All his family, relatives and friends gathered around to help him, but in vain. The crocodile wouldn't simply let go. When they realised that ‘death’ has come close to Gajendra, they left him alone. He trumpeted in pain and helplessness until he was hoarse. As the struggle was seemingly endless and when the last drop of energy was also sapped, Gajendra called to Lord Vishnu to save him, holding a lotus up in the air as an offering.
Hearing his devotee's call and a prayer, Lord Vishnu rushed to the scene. As Gajendra sighted the Lord coming, he lifted a lotus with his trunk, seeing this lord was pleased and with his Sudharshana Chakra separated the crocodile's head from its body and Gajendra prostrated before the Lord. Vishnu informed Gajendra that he, in one of his previous births, was the celebrated King Indradyumna, a Lord Vishnu devotee, but due to his disrespect to the great Sage Agastya, he was cursed and had to undergo this life.
Because Indradyumna was a chosen one, Lord Vishnu had him born as Gajendra and made him realize that there is something called, "Moksha / Kaivalya" which is beyond Svarga and Urdhva Loka. Indradyumna could attain Moksha finally when he (as Gajendra) left all his pride and doubt and totally surrendered himself to Lord Vishnu.
The prayer made by Gajendra on this occasion became a famous hymn in praise of Lord Vishnu called the Gajendra Stuti.
शुक्लांबरधरं विष्णुं शशि वर्णं चतुर्भुजं ।
प्रसन्न वदनं ध्यायेत सर्व विघ्नोपशान्तये॥
So the story even though it is known as 'Gajendra Moksha', actually the moksha was given to the crocodile also. And crocodile got the 'rare privilege'(same as in the case of Ravana, Kamsa,etc.) of getting killed by the hands of Lord Vishnu and was given moksha before the Gajendra."
In Bhagwat Gita, God assures his disciple Arjuna in many ways & asks him to take refuge in Him. Lord says that He shall emancipate him of sin in all ways, shall rescue him in his life always. Through Arjuna, God is giving a message to all people that they should be devoted to Him, as through devotion, they shall reach Him easily. Below are verses of Bhagwat Gita where God assures Arjuna through these verses. Firstly, it is written, as it is written in original Sanskrit in Bhagwat Gita & below that is English translation of that verse.

Through above verse 30, God is telling Arjuna that even if the most sinful of person worships Him with full devotion, then He considers him to be a saint only as he has rightly resolved in his life. So many times we too think that we have done many sins in life & how God shall accept us, but here God makes very clear that once a person become devoted to Him, He does not considers that person a sinner, rather God considers that person to be a Saint as he has taken the right decision in his life to become devoted to God. Let's all be devotees of God.

Through above verse 31, God is telling Arjuna that such a sinful person after becoming His devotee becomes a person of good virtues and always remain in peace & such a peace is not temporary but is ever lasting. God is assuring the son of Kunti ( another name of Arjuna, his disciple) that his devotee never falls again in life as He always protect him. So let's all worship the God always so that He can protect us always.

'Fix your mind on Me, be devoted to me, worship Me & offer obeisance's to Me. In this way, linking to Me, you shall surely come to Me.'

Through above verse 34, God is asking Arjuna to fix his mind on God as after worshipping Him & paying obeisance's to God, he shall automatically come to Him. We should also follow the same path & let's become devoted to him by praying Him daily. God is very clear that once a person comes in God's refuge, then all his problems are solved & God becomes his protector in this life & life beyond.

Jai Sri Krishna
Posted by Sancho at 10:42 AM