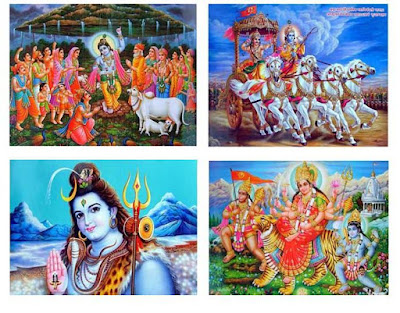 & Muslim sects mostly believe in a formless God. So different minded people of the world see God in different forms or formless God too.

God is basically formless as Soul or Super Soul is formless & cannot be seen with the eyes due to it's very subtle nature. As God is almighty, He is free to take any form. That's why there are so many different forms of God in Hinduism & God appears in different forms from time to time as per the Hindu mythology. As any Form is a representation of Maya as per the Hinduism, so even the different forms of God are representation of Maya only, while in fact God is formless. Formless only creates the Forms & not otherwise. Below is a story which exemplify this fact beautifully:

"In a rural village of India there was a little park where people used to come in their spare time. Villagers used to spend their idle time over there & used to sit and chat with each other. The path to this park lay alongside the forest. On the edge of the path there was a large, well-known Kadamba tree. One day a city-dweller came to the village, passed by the tree, and saw a peculiar lizard climbing on the trunk of that tree. When he reached the park he told the others sitting there, "I just saw a Green lizard on that old Kadamba tree!"

"No, no, not Yellow," said another, "it is Cream coloured." Then others chimed in: "We have seen it -- it is lavender (gray, etc.). Each person had a different picture of the lizard.

They decided to go to the tree to find the animal and settle the argument. What they found was a Sadhu (Saint) from the forest, sitting in meditation under that Kadamba tree. The villagers questioned him about the animal. The saint answered, "I know all about that creature, who lives on this tree," he answered. "It is a Chameleon" (a creature who is able to change his body colour at will). "It is sometimes lavender, sometimes gray, sometimes green, yellow, cream, and sometimes it has really no color at all."

Saint further said, "God, too is like that Chameleon, taking on different qualities and appearances, and then again He has none."
In Hinduism many God's are worshipped but all these Gods are manifestation of one Supreme God only which is explained in Bhagwat Gita Chapter Ten in detail.

"Sri Krishna said: Of letters I am the letter A, and among compound words I am the dual compound. I am also inexhaustible time, and of creators I am Brahma."

"Sri Krishna said: I am all-devouring death, and I am the generating principle of all that is yet to be. Among women I am fame, fortune, fine speech, memory, intelligence, steadfastness and patience."