Why Bhishma Pitamah had to Suffer on a Bed of Arrows? 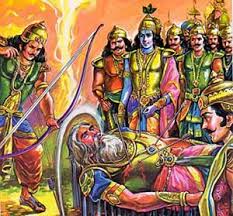 When Bhishma Pitamah was struck down by Arjuna,in the Mahabharata War, he fell down from his chariot. But since the arrows had pierced his chest (gone aar-paar), he did not touch the ground, but remained lying on the bed of arrows. His head was hanging, he needed to rest it, and told Arjuna to make some provision. Arjuna immediately stuck 3 arrows beneath his head to support it. Bhishma remarked joyfully - "What a fitting pillow for a warrior like me - a pillow to match the bed !". Next he asked for water, since he was thirsty. Arjuna once, more, struck a mighty arrow right through the earth, and Ganga maiya surged up to pour cool water in the parched mouth of her beloved son. So Bhishma Pitamah had to suffer the pangs on the bed of arrows in battlefield before attaining final beatitude and redemption to Vaikuntha Loka.

Now what was the Karmic reason that Bhishma Pitamah had to Suffer on a Bed of Arrows? To the question as to why Bhishma Pitamah was suffering this punishment even when he had not committed any sin during past 72 birth lives (Great Bhishma could peep into his past lives through Samadhi), Lord Krishna replied him that he committed a folly in past 73rd life birth when he inflicted injuries to insects by piercing thorns / needles into their bodies. Those thorns have now appeared as bed of arrows for you. Your sinful Karma remained dormant as you were a pious person throughout theses lives but since you have now become a party to Adharma of Duryodhana, the sanchit evil Karma’s of 73rd life has ripened now.