How Big Is God? 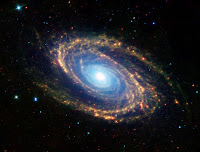 Can you tell me how Big is this Universe or how vast is this Space in which endless Planets & endless Galaxies are there? In fact all this Universe with endless Galaxies is Infinite. Infinite simply means “Without Limits” & beyond the comprehension of human mind. When we think of that infinite then we just think of the limitless. Now God is called the creator of this limitless Universe & is much bigger than this Universe. Vedas say that all this Infinite, limitless Universe was created with just one fourth of the powers of God & three fourth of His powers still remains with the God. So God is beyond Infinite & is incomprehensible.

Once someone sent a model device made of salt in the "Big Ocean" to measure it's depth. But when model went in the ocean, it just got dissolved in the waters of the ocean & became one with the ocean. It could not measure it's depth. Same is the case with human beings. When a person tries to measure the vastness of the God then in this search that person becomes one with the infinite God but he cannot in reality know the true vastness of the God. So the question "How big is God?" is not to be answered by the finite human mind. Human mind is having it's own limitations due to which it cannot know someone who is having Infinite vastness & Infinite powers.

God as infinite is limitless, Omnipresent & the one who fills this limitless space. Such an Infinite God exists everywhere & is not limited by time or space. In all the religions of the world God is designated as a singular, universal Supreme Being who encompasses all this creation. His all the attributes such as power, wisdom, love, compassion etc. are limitless & hence Infinite.

Bhagwat Gita describes the God as unborn, eternal, ever-existing, infinite and primeval. God is never born nor dies at any time. God is manifest & un-manifest both i.e. He is there before the creation & also present during the creation. He is omniscient (knows everything), omnipresent (who is present everywhere), omnipotent (who is having all the powers & is all powerful), imperishable & indestructible. He is invisible, inconceivable and immutable. He is having supernatural powers. He is Truth Absolute, Knowledge Absolute and is Infinite. He is everlasting, present everywhere, unchangeable, immovable and eternally the same. So are some of the qualities of God described.

Here below are few verses from Bhagwat Gita which describe about the infinite nature of God:

"Sri Krishna said: O Arjuna, there is nothing else besides Me in this world. Like clusters of yarn-beads formed by knots on a thread, all this world is threaded on me.

Here below is a "Hymn to that Universal, Omnipresent Infinite God". It is from "Svetasvatara Upanishad":

You are the Ancient One & the Lord of Shining Light,
You dwell beyond all the darkness and the night;
knowing You alone can a man cross over death,
There is no other path for him to take."

All heads are Your heads, all faces Your faces,
You dwell inside the heart & also in all hidden places.
Through the whole universe, You have extended Yourself.
You are Shiva, the auspicious, the ever-present Lord."

With hands and feet everywhere, eyes and ears
Everywhere, heads and mouths everywhere,
You have filled up every corner of the space.
Smaller than smallest and larger than largest."

Present are You in the depths of our heart.
When free of desires and unshaken by sorrow, we
Seek for You only, then by Your grace,
Your Form and Your glory stand clearly before us.

"O Lord, Creator of even Brahma, the creator,
Revealer to him of the knowledge called Veda,
To You, I come in my longing for freedom;
To You, for refuge, with reverence, I come!"

So let's pay our obeisance's to such an Infinite God. Let's also think that God is always near to us & is always in our heart. Then He too shall never give you up or never depart. God is always with you & shall always be with you if you think Him to be supreme. So always have trust in your life that God is near you though He is present in all the creation.