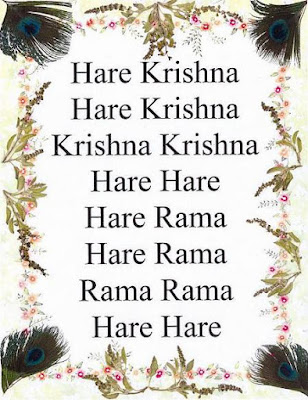 Chant is basically the rhythmic singing or speaking of words or sounds. It often includes a great deal of repetition of musical sounds. Chanting is a commonly used spiritual practice. Just like Prayer to God, Chanting is also used to invoke the God. Chanting can be done individually or as a group practice. Diverse spiritual traditions consider Chant as a route to spiritual development. The concept of Chanting mantras is of particular significance in many Hindu traditions and other closely related Dharmic Religions. For example, the Hare Krishna movement is based especially on the chanting of Sanskrit Names of God.

"Divine Chants" are chanting the names of God which give peace of mind. It is one form of the Divine Satsang and Kirtan that happens generally in Indian society. Listening to these chants regularly gives lot of peace of mind. These Divine Chants can make people dancing to it's tune to ecstasy.

Some of the beautiful chants are here below. Just click on the link to see the video of the said chant:

1) MahaMantra - "Hare Rama Hare Krishna" - It's a chant of the Mantra:

2) "Hare Krishna Hare Krishna" - It is a beautiful chant sung in the praise of Lord Krishna & Lord Rama.

3) Gayatri Mantra - It is a sacred Hindu chant. It is widely used in meditation & listening to this chant brings peace of mind. As per Bhagwat Gita God is present in the form of WORD as "Gayatri Mantra".

4) "Hey Govind Hey Gopal, Radha Vallabh Madan Gopal" - It is a beautiful chant sung in the praise of Lord Krishna.

7) "Krishna Govind Govind, Gopal Nandlal" - It is a beautiful chant sung in the praise of Lord Krishna.

Below are few verses from Bhagwat Gita which suggests for the chanting of Mantras:

"Sri Krishna said: Of the great sages I am Bhrgu; of vibrations I am the transcendental Om. Of sacrifices I am the chanting of the holy names / japa, and of immovable things I am the Himalayas."

"Sri Krishna said: O Arjuna, From the beginning of creation, the three words "Om Tat Sat" were used to indicate the Absolute Truth. These three symbolic representations were used by Brahmins while chanting the hymns of the Vedas and during sacrifices for the satisfaction of the God."

"Sri Krishna said: Always chanting My glories, endeavoring with great determination, bowing down before Me, these great souls perpetually worship Me with devotion."