"Virat Rupa" - the Cosmic or Universal Form of God 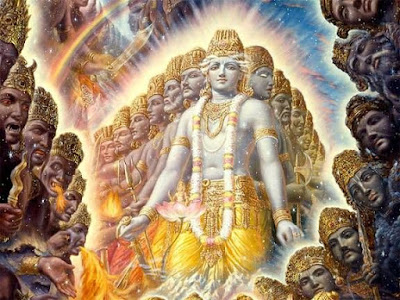 In Chapter - 10 of Bhagwat Gita, Arjuna enquires from Lord Krishna about the various forms through which Lord is pervading in all these worlds in His divine opulence. To this query of Arjuna Lord Krishna replies that, "Of lights He is the radiant sun; of immovable things, He is the Himalayas; among the stars He is the moon; of purifiers He is the wind; of the wielders of weapons He is Lord Rama etc. etc.

Now as per Chapter - 11 of Bhagwat Gita, Arjuna asks Lord Krishna to show him the Cosmic Form of God, the way Lord Krishna just described Himself. On this request of Arjuna, Lord Krishna bestows a special “vision” to Arjuna so that he can see the Divine God in His universal form. In this Cosmic or Universal Form, Lord Krishna shows His opulence's, hundreds of thousands of varied divine and multicolored forms. Lord Krishna shows Arjuna, different manifestations of Adityas, Vasus, Rudras, Asvini-kumaras and all the other demigods. Lord Krishna also shows in His Universal Form many wonderful things which no one has ever seen or heard of before.

Arjuna saw in that Universal Form, unlimited mouths, unlimited eyes, unlimited wonderful visions. The form was decorated with many celestial ornaments and bore many divine upraised weapons. He wore celestial garlands and garments, and many divine scents were smeared over His body. All was wondrous, brilliant, unlimited, all-expanding.

"If hundreds of thousands of suns were to rise at once into the sky, their radiance might resemble the effulgence of the Supreme Person in that Universal Form."
On seeing such a fierce form of God, Arjuna gets frightened & asks God, “Who are you in this fearful form & what is Your mission in this form?”

To this query of Arjuna "Lord Sri Krishna says: Time I am (Kala), the great destroyer of the worlds, and I have come here to destroy all people. With the exception of you (the Pandavas), all the soldiers here on both sides will be slain."

Arjuna now realizing the might of the Lord apologizes to Lord Krishna, that he has considered Him as his friend & rashly addressed the Lord, “O Krishna,” “O Yadava,” “O my friend,” not knowing His divine glories.

The above said article explains well that we should not talk lightly of God & should show full reverence to God.